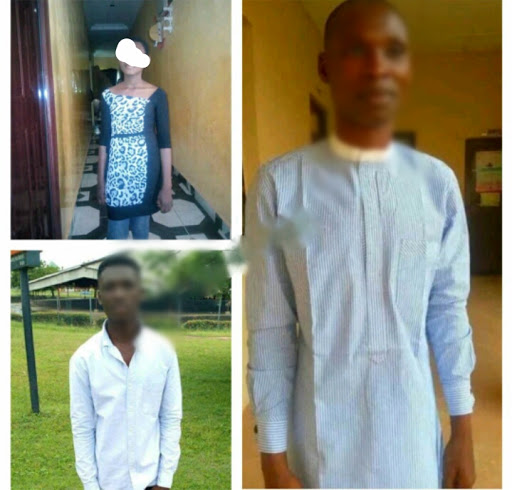 A 13-year old childhas died in Benue State after being sexually assaulted by a father and his son.The child , Ochanya who battled with Vesico Vaginal Fistula (VVF) and other health complications died at the  Benue State University Teaching Hospital, Makurdi. Ukan Kurugh , Benue Humanitarian who posted this article expressed his saddness and sorrow over the painfull incident which took place in Benue state. According to Ukan,the 51-year old violator who is said to be the Head of Department, Catering and Hotel Management at the Benue State Polytechnic, Ugbokolo, Benue State, Mr. Andrew Ogbuja and his son, Victor Inalegwu Ogbuja, a final year student of Animal Production at the Federal University of Agriculture, Makurdi, consistently molested little Ochanya since she was 8. The autopsy report also affirmed the cause of her death to be sexual molestation of a minor. Little Ochanya, who has been living with the pedophilic father and son as a result of family affinity to the man’s wife (Mrs. Felicia Ochiga-Ogbuja) who is her cousin for the purpose of accessing education due to the near absence of a school in her remote village, became an object of sexual satisfaction for the pedophilic lecturer and his son who would occasionally drug her before molesting her back and forth with threats of death if anyone got to know of it. She would take ill but it was difficult for the hospitals in Ugbokolo to detect exactly what was wrong. Occasionally, she would even collapse. In February 2018, she again collapsed and this time, was bedridden for 2 months because she was terribly sick and couldn’t even resume school at the Federal Government Girls College, Gboko. In June, a caregiver who runs an Orphanage in Otukpo picked interest in her pitiable health status and decided to take her to the Benue State University Teaching Hospital, Makurdi, where it was revealed that she was being sexually abused on all sides and this had affected her badly causing uncontrollable defecation and passing of urine. Ochanya, after serious interrogation revealed how long the molestation had been taking place and how she was threatened against her life if anyone got to know of what was happening. She explained that she was forced with drugs which made her not to be very conscious of what happened. For the records, she is of humble parents who are resident far in a remote village and who do not have the financial means to pursue to logical conclusion, such adversity against their daughter. The situation was reported at the Police Headquarters in Makurdi and the man was arrested and the case was charged to court while Ochanya continued to struggle for her life in the hospital. At the court, the man was ordered to be remanded pending the next adjournment in September 24, 2018 when it was assumed that the son too would have been arrested and charged. But before the adjourned date, the man walked out from the Makurdi jail where he was remanded. On the next adjournment, the lawyers to Ochanya couldn’t make it to court and the case was further adjourned to 5th November 2018. Molested and sodomized, Ochanya, in her condition, couldn’t recognize anyone and her eyes remained closed. On wednesday 16th October 2018,  she couldn’t battle further, she took her last breath.
We pray for the peaceful repose of her soul. In his painful mood , Ukan Kurugh said “I bring this story to the world for the sake of Justice against the spirit of a poor girl.Is Mr. Andrew Ogbuja and his son, Victor, truly human?Do they deserve to be alive?Is he supposed to remain a lecturer?Is his son supposed to be an undergraduate?Where is our Justice system?What are the police doing to foster law and order?Look at the abhorable evil and its consequences. Can this nincompoop of an idiot and his illiterate son of an undergraduate know peace? His generation is doomed for life. They will have to pay for their wrong. Friends and fellow humanitarians; let us rise up and fight this evil family to their end. These kind of people have no purpose in a God given lifeThe deceased girl’s family can be reached through: +234 8121388899
Really sad , this is painful.