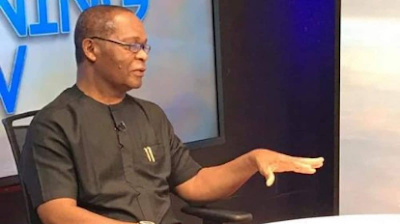 Joe Igbokwe, Special Adviser for Drainage and Water Resources to Governor Babajide Sanwo-Olu of Lagos State has said the presidential candidate of the ruling All Progressives Congress, APC Bola Ahmed Tinubu should be regarded as Christian.

He said this while reacting to the controversy surrounding Asiwaju’s choice of running mate.

Recall that Tinubu, a former Lagos State Governor who is a Muslim, on Sunday announced a former Borno State Governor Kashim Shettima, a core Muslim as his running mate for the 2023 presidential election.

Reacting Igbokwe who had backed Tinubu’s choice said Asiwaju’s wife, Oluremi Tinubu is a pastor with the Redeemed Christian Church of God, RCCG.

A post on his official Facebook page said Tinubu and his wife are one according to the teaching of the Holy Bible.

He wrote, “Do you know that Asiwaju’s wife is a pastor in Redeemed Christian Church of God? Are husband and wife not one again according to the Holy Book”?