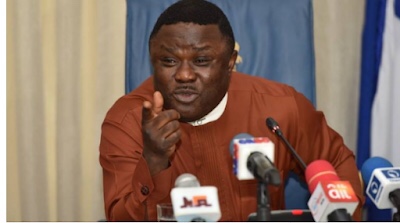 Ben Ayade, governor of Cross River, says he will run for president in 2023 if the All Progressives Congress (APC) considers him (APC).

The governor spoke on Wednesday in an interview on Sunrise Daily, a Channels TV programme.

While responding to a question on whether he will run for president in 2023 on the platform of the APC, the governor said the party should make the decision based on zoning.

But when pressed further on the subject, the governor said he will contest if the party finds him “fit and proper”.

“I think the party should take a decision based on zoning principles which would be resolved as a party,” Ayade said.

“Let me say, yes and no. If the family (APC) finds that I am fit and proper, yes. If the family finds that there is a better option and that option fits into the zoning (arrangement), of course, I will stand by the party’s position.

Speaking on the state of affairs in the country, the governor said President Muhammadu Buhari has improved the economy and security of the nation.

“Perhaps, if it was not Buhari’s administration with his military background, the country would have collapsed at this stage,” he said.

“People don’t know that because if you have been able to avoid risk, nobody can see it because it was avoided. I think the situation could have been worse.”