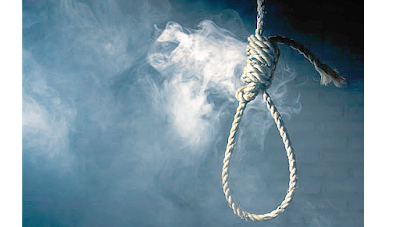 One Paul Majie, a 29-year-old unemployed man, on Thursday committed suicide in his room at Dadin-Kowa in Jos South Local Government of Plateau.
Shocked neighbours, who spoke with the News Agency of Nigeria (NAN) on the incident, said that Majie’s lifeless body was found hanging in his room in the morning.
“We do not know why he did that, but we suspect he killed himself out of frustration,” a neighbour, who refused to disclosed his name, told NAN.
Efforts to speak with his family members proved abortive as they appeared to distraught to discuss the matter with anyone.
Mr Terna Tyopev, Public Relations Officer (PPRO) of the Police Command in Plateau, who confirmed the incident to NAN, said that Majie’s body lifeless body was found hanging in the morning.
“Today, at about 7:15.a.m, one Augustine Nyam of Dadin-Kowa area of Jos reported at our Rantya Division that Mr. Paul Majie had committed suicide.
“Our detectives were immediately dispatched to the scene of crime. On arrival, they brought down his motionless body and took it to the Specialist Hospital, Jos.
“Unfortunately, the doctor on duty confirmed him dead and the body was deposited at the mortuary in the same hospital, “he said.
Tyopev said that an autopsy would be conducted on the dead body to ascertain the real cause of his death.
He also said that investigation on the case was ongoing (NAN)