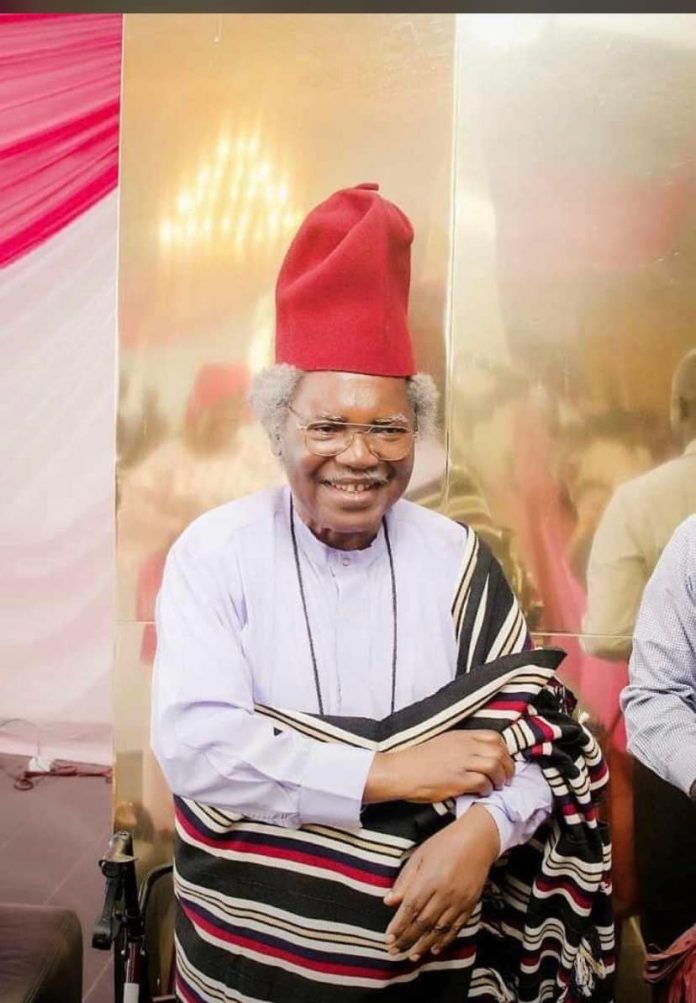 Commendations have not stopped coming in for the late Wantaregh Paul Unongo, ex Minister of Mines and Steel Development, who passed away on Tuesday at the age of 87.
Wantaregh Paul Iyorpuu Unongo, who was born on September 26th, 1935, in Turan, Kwande Local Government Area of Benue State, is of the Kwaghngise-Anure-Abera heritage.
Young Unongo started working for the prestigious Barclays Bank, DCO in November 1958 as an entries clerk. Wantaregh Paul Unongo advanced quickly and reached the coveted position of Acting sub-Accountant in 1959, which is often exclusively held by White people, thanks to his perseverance, hard work, and the supportive encouragement of his British expatriate Manager, Mr. Naylor. While his banking position with Barclays Bank, DCO, was extremely profitable and enviable at the time, for a young guy, his intrinsic desire to pursue higher education led him to leave from it for a six-year scholarship from the North Regional Government that will allow the recipient to pursue a psychology doctorate at the University of London.
Unongo continued to regularly lecture at the University of Lagos in 1968, 1969, and even 1970 while aggressively pursuing the country’s psychological war objectives. He also contributed to the establishment and growth of the Department of Psychology and His degree-awarding programme. ”Say It Loud We Are Black and Strong”, a postmortem of the crisis and a true masterwork on the Nigeria of his dreams, was published by Unongo at the end of the conflict in 1970. In order to plan the transition to civilian rule in 1975, General Murtala Muhammed chose fifty eminent Nigerians to create a suitable document.to advance his academic career.He went on to the Nigerian College of Arts, Science, and Technology Zaria, which is now Ahmadu Bello University, Zaria, in October 1959 for the two-year Pre-Degree Programme, which was actually the Advanced Level GCE in Zoology, Physics, and Chemistry and was then referred to as Pre-Medicine. He successfully completed his course in 1960. Douglas Green Wantaregh, a Canadian, was accepted to the University of Calgary in Canada to study experimental psychology with the support and assistance of the Northern Nigeria’s expatriate Chief Social Welfare Officer. After two years, he moved on to the University of Alberta in Edmonton, Canada, where he earned both his B.Sc. and M.Sc. in Experimental Psychology with a focus on Human Experimental Psychopathology. He then received an offer of a six-year scholarship from the North Regional Government that will allow the recipient to pursue a psychology doctorate at the University of London.

Unongo continued to regularly lecture at the University of Lagos in 1968, 1969, and even 1970 while aggressively pursuing the country’s psychological war objectives. He also contributed to the establishment and growth of the Department of Psychology and his degree-awarding programme. Say It Loud We Are Black and Strong, a postmortem of the crisis and a true masterwork on the Nigeria of his dreams, was published by Unongo at the end of the conflict in 1970.

In order to plan the transition to civilian rule in 1975, General Murtala Muhammed chose fifty eminent Nigerians to create a suitable document. Nigeria’s modern constitution The best of Nigerians were needed for this task—people who were committed, educated, experienced, and versatile. Wantaregh was recognised as one of the “Fifty Wise Men” by the Military Government.
General Olusegun Obasanjo, the then-head of state, recognised his achievements by naming him an Officer of the Federal Republic (OFR) in appreciation of his merit.
Since that time, Wantaregh has continued to be a favourite of succeeding administrations, functioning at his discretion as a policy adviser to various regimes. Unongo was once more a participant in the 1994 Constitutional Conference, when he presided over the committee charged with creating the states.
Without his foray into politics, life would be meaningless. He took the moniker Wantaregh as a result of his adamant desire for equal opportunity for the disadvantaged and oppressed. very learned Wantaregh, who was extremely intelligent, vocal, and fearless in no small amount, battled to win respect for his people in the context of the developing democratic arena. A number of political movements in Nigeria he helped create. They founded the Nigerian People’s Party (NPP), and he served as the organization’s first Secretary General, together with individuals like Dr. Tunji Otegbeyi, Solomon Daushep Lar, Chief Femi Okunno, Alhaji Abubakar Rimi, and (along) with his role model, the Rt. Hon. Dr. Nnamdi Azikiwe.
He played a crucial role in the formation of the National Government, which was driven by the union of the NPN and the NPP, two political parties. In 1979, this alliance deposed President Shehu Shagari’s military government. Because to his political cunning, he was appointed Minister of Mines and Steel Development seven months later, he left Steel Development on moral grounds. Wantaregh has continued to be purposefully relevant in governmental affairs ever since. His little contribution to his people’s socioeconomic growth is unmatched.
Wantaregh Paul Unongo has devoted his entire life to serving others. He has a body of scholarly writings and is an accomplished intellectual and orator. Especially noteworthy are: Where Do We Go From Here? An Open Letter to the Nigerian Tiv People. The Argument for Nigeria, Say it Out Loud, We are Black and Strong, and Our Tiv Heritage Iyou Mbi Hev Iniongo (The Celebration of the Feast of New Yams).
Wantaregh Humanist Paul Unongo is a brilliant social analyst who consistently supports the underdog and the underprivileged; he is a social entrepreneur who has made it his life’s work to improve the lot of the average Nigerian via extraordinary deeds of practical philanthropy. In Nigeria’s cities and rural areas, he founded private schools, hospitals, and homes for the elderly, physically disabled, and indigent.
Wantaregh One of Nigeria’s most inspiring leaders, Paul Unongo has always been in the forefront of promoting ground-breaking concepts. He takes no offence at acting as the Tiv people of Nigeria’s most vociferous advocate in the Nigeria project because he is particularly sympathetic to their plight and feels that they are frequently underserved. Wantaregh Since there are over 250 different ethnicities, but also inspires other Nigerians to appreciate the benefits of the country’s rich ethnic diversity. In order to assure the success of the Nigerian project in a multi-ethnic, multi-cultural setting, he has worked relentlessly and still does.
Wantaregh As a result of his experiences in Nigeria at the local, state, national, and international levels, Paul Unongo has recommitted his life to presenting the story of Nigeria. His company strategy is charitable enterprise, where products and services are not designed to maximise profit but rather to provide economic and livelihood chances for the underprivileged in the vicinity of his immediate communities. Wantaregh has built and is still building schools, hospitals, markets, and houses of worship.

Numerous dependents have continued to receive assistance from his Paul Unongo Foundation. He has several biological and adoptive children, some of whom excel in their own fields, and he has a happy, healthy, and prosperous family life.
Wantaregh is actively committed to this crusade because he recognises that unifying the vast North is essential to maintaining Nigeria’s stability. He joined the Northern Elders’ Forum as a founding member and rose to the position of convener/leader. His campaign for harmony, equality, fairness, and peaceful cohabitation among our many different tribes and religions created a foundation for tolerance and understanding in our region of the country.
Wantaregh Paul Unongo, although being 87 years old, is still fiercely committed to the ideas of humanism, simplicity, reconciliation and  receiving with joy the Tiv nation’s first-ever traditional role as “spiritual head and oracle.” He never gets tired of using his extensive knowledge and experience for the benefit of his people, his town, his country, and all of humanity.
Wantaregh Paul Unongo, the current Chairman of the NERDC Governing Board, is a devoted husband and father.