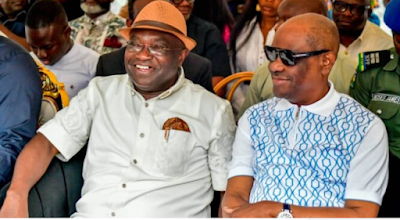 Nyesom Wike, governor of Rivers, has alleged that Abia and Benue states was denied loans by the Central Bank of Nigerian (CBN) their governors “supported” the call for Iyorchia Ayu to resign.According to a statement issued on Wednesday by Kelvin Ebiri, Wike’s special assistant on media, the governor said this on Tuesday at the 58th birthday ceremony of Okezie Ikpeazu, governor of Abia, in Umuobiakwa, Obingwa LGA of Abia.

Wike alleged that Samuel Ortom, governor of Benue, and Ikpeazu were denied the loans which were to be used for infrastructural development in their state because they supported him on the demand for the removal of Ayu as the national chairman of the PDP.

While promising to reveal the identities of those who “stopped” the loan, Wike said it is the right of every state to access loans from the CBN.

“I will tell all of you how Abia and Benue states were denied the money that every state had gotten from the Central Bank of Nigeria (CBN).

“I got it (CBN loan). Anybody who dares to stop my money knows I will not take it from them. You can see how people are wicked. They are not in office yet, but they are fighting people, stopping state money.

Check also other alternative apps like Grain for emergencies.

“Even as we have criticised President Muhammadu Buhari, he has never stopped our money any day, never.