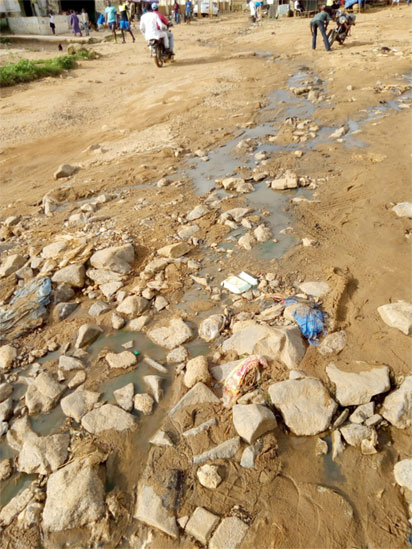 Abuja residents living in Dawaki village, a suburb of the Federal Capital Territory (FCT), have called for help from the Federal Government to fix the bad roads in the community.
The residents spoke in separate interviews with newsmen in Abuja on Monday.
Many of them were worried that the situation of the bad roads had prevented them from pursuing their day-to-day activities.
Mr Audu Isa, a motorist and student, National Open University of Nigeria (NOUN), lamented that he had to take a longer route just to get to the next town because of the bad road.
Isa noted that the bad road had also made him to spend more money in fixing his motorcycle, due to damage caused by the bad roads.
He, therefore, called on the Nigerian Government to come to the aid of Nigerians to enable them enjoy the dividends of democracy they had voted for.
Also, Mrs Iyeh Benjamin, a trader, also expressed her view over the cases of accidents she had witnessed due to the bad roads.
According to her, lives of people are put in danger on a daily basis because of the bad roads.
“The state of the road is not only affecting transportation sector of the community, it is also affecting the economy sector.
In a similar vein, Miss Promise Chukwudi, a business lady, who deals in cloth and shoes said: “my business is not moving well due to this bad road.
According to her, the road became worst during the rainy seasons as it drove most of our customers away and those who have cars were forced to take other routes.
“We experience a lot of challenges during the rainy season but things are not also better during the dry seasons because the dust from the road is something else.
“ This is because most of the clothes displayed outside are stained and even when taken inside, there is little or no difference,’’ she said.
Mrs Eunice Olagoriowo, a baker, critically complained of how most of her customers had to run because of the road.
She said: “I can even count the people that patronise me now, they are of low numbers and the reason is not far fetched from the situation of the roads.
“My cakes, which are used for sample, are also almost broken because I have to conserve it between locked doors since I will not want it stained with the dust during dry seasons.
“Also closing the shop’s doors will give the people the notion that you have closed for the day,’’ she said.
However, Etsu of Dawaki village, Chief Joshua Zakaria, said he had written to the Minister of Works and that delegates were sent to inspect the road but nothing had been done.
Zakaria pointed out that the several letters he had written to the past administrations up till date had not yielded any result.
He said that during the past administration, there were promises to fix the roads, adding that he was directed to wait since the government had promised to include it in the budget.
“We sold most of our lands out to people who promised to help since the government has not done anything till now but we get peanuts as pay for what we did.
“Each government that came on board promised to help us repair the roads but all these are empty promises as nothing was done by the past administrations.
“The roads have been like this for years now and all we want is positive change and not just promises from the government,’’ he said.
He, however, pleaded that the government should come to their aid as the community wants action from the government instead of just sending delegates.
NAN