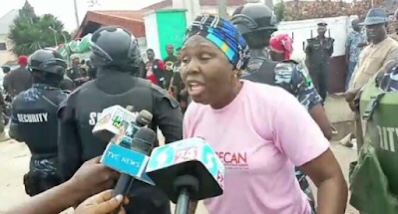 Betty Anyanwu-Akeredolu, the First Lady of Ondo State and an APC senatorial candidate for Imo East, has revealed that she has withdrawn from the race.

According to her, the move became imperative following alleged intimidation meted out on her, as well as her supporters.

She announced her decision to quit the race in a statement entitled, “Notice of withdrawal from Senate race”, which she issued in the early hours of Sunday.

In a viral video on Saturday, the First Lady had cried out over plots to shut her out of the process, adding that she approached Governor Hope Uzodinma over the situation.

According to Akeredolu, information at her disposal revealed that arrangements had been concluded by some “high authorities within the party” to pick a particular aspirant.

“I must, at this juncture, appreciate Ada Owere team, all my friends and supporters who stood by me during this period. Special thanks to the delegates who believed in me but were denied the opportunity to

express their support,” she said.