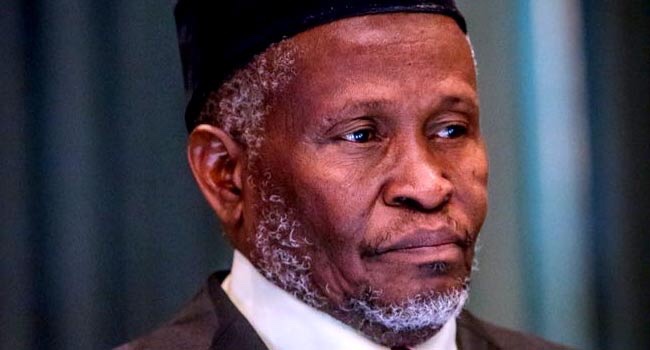 The lawyers, who wished him a happy and restful retirement, however said that the pending allegations against the former Chief Justice were very weighty and would have to be investigated by the National Judicial Council (NJC) with him grilled by its panel for the purpose of entering findings and recommendations on the issue.

The Chief Justice of Nigeria (CJN), Justice Ibrahim Tanko Mohammad, resigned his office on Sunday, June 26, but the information about it became a public knowledge on Monday June 27.

In his letter of resignation, the jurist had cited ill-health as reason for his decision.

Justice Ariwoola, who is the next most senior justice of the Supreme Court, has since been sworn in after recommendation by the NJC to President Muhammadu Buhari to take over in acting capacity.

By the resignation of Justice Tanko, the number of justices on the Supreme Court bench had dropped to 14.

The development was, however, the latest on the rumblings that followed the altercations between the 14 justices of the Supreme Court and the Chief Justice of Nigeria.

Vanguard had less than two weeks ago exclusively reported that 14 serving justices of the Supreme Court of Nigeria, SCN had confronted Justice Ibrahim Tanko Muhammad over welfare issues.

Vanguard had reported that the aggrieved judicial officers said while the relevant Federal Government agencies saddled with the responsibility of reviewing upward their salaries and allowances kept them on the same salary for 14 years now, the Supreme Court of Nigeria, under the leadership of Justice Muhammad, had worsened their situation by denying them the welfare package they were entitled to, even when the package was captured by the court’s budgetary allocation.

The justices contended that the work they do is very serious and sensitive ones, which ordinarily required the appropriate authorities to take good care of them to be able to deliver as expected.

They said unfortunately, they were currently hampered by both internal and external forces to a point that it was becoming practically impossible for them now to discharge their sensitive duties to the nation.

Specifically, in a memorandum by the 14 justices of the Supreme Court to ex-CJN Tanko, they said they were aggrieved by his handling of their welfare.

They contended that past administrations since democracy berthed in 1999 had never treated them shabbily as it was currently.

They said the Chief Justice had allegedly refused to give them what they were entitled to notwithstanding the fact that the entitlements were captured by the court’s budget.

They said a number of their allowances were not paid since last year and that they were not allowed to go for their annual international training/workshop last year, while the money meant for the purpose was withheld.

Vanguard learned that the judges are paid in dollars to embark on the annual trip for the international training/workshop but that the present Supreme Court administration denied them.

It was learned that in other jurisdictions, top judicial officers of their stature are exposed to series of such trainings annually to improve their skills.

Besides, they said the Chief Justice refused to sign their practice direction already prepared since the time of COVID.

He was said to have practically sat on it for reasons best known to him.

It was also reliably learned that the administration of Justice Tanko Muhammad refused to renovate their residences, arguing that the shoddy treatment did not happen under previous administrations.

The judicial officer added that they were prepared to escalate the matter to the appropriate authorities if nothing was done soon.

The 14 justices of the apex court had dragged the Chief Justice of Nigeria, CJN, to his closest friend and former Justice of the Supreme Court, Justice Sidi Bage, to call him to order.

Justice Sidi Bage, who is now the 17th Emir of Lafia, brokered a meeting between the Chief Justice of Nigeria and other justices of the apex court to resolve the matter amicably on Thursday, June 9.

The media had since been feasting on the story with a number of editorials and articles written on the issue.

The former Chief Justice of Nigeria, Justice Tanko had not only confirmed but also reacted to the memorandum sent to him by the 14 justices of the Supreme Court.

He spoke through his media aide, Mr Ahuraka Yusuf Isah.

In a statement issued on the matter, the CJN said he had managed the resources at the disposal of the apex court judiciously and that there was nothing to hide.

The statement read in part, “The accusation so far, in summary, is that more or all ought to have been done and not that nothing has been done; which is utopian in the contemporary condition of our country.

“Before eight new Justices were appointed in 2020 onto the apex court bench, there was no additional budget to provide new chambers with equipped library, legal assistance, residential accommodations, and logistics for them.

“The Apex Court has to make do with the resources at its disposal to meet their needs over time. All the Justices of this Court have at least a legal assistant, except some may opt for more.”

Already, the Nigerian Bar Association NBA, the Body of Benchers and the Senate Committee on Judiciary had last week set machinery in motion to intervene in the current face-off with a view to resolving the crisis in the Judiciary.

But on Sunday, June 26, the CJN did a letter to throw in the towel.

Ever since the news broke, many Nigerians particularly prominent lawyers have been reacting.

In a telephone chat with one-time President of the NBA, Mr O CJ Okocha (SAN), he said the decision of the CJN was surprising to him.

His words: “Very surprising to me. But we know that every human being is susceptible to health challenge.

“So, I sympathise with his lordship and I wish him good luck and pray for his speedy recovery. It was rather unfortunate, very unexpected.”

Asked if he agreed with some Nigerians insinuating that he might have resigned because of the allegations made against him by his brother Justices, Okocha said: “I think people should be cautious before they jump to conclusion.

“However, my take is that those allegations against him are very weighty and the NJC will look into it.”

Okocha said since he joined practice in 1978, a period of about 46 years, he had never experienced such situation.

“This kind of thing has never happened in the entire years of my practice as a lawyer since 1978, over 46 years ago.

“I think they are weighty allegations that should be investigated using the due process of the machinery put in place by the Constitution. That is to say the NJC.

“That is the only body that is empowered by the Constitution to look into any allegation of financial mismanagement as you said or as we have heard; misconduct as alleged against the CJN as he then was.”

Okocha added that even if the ex-CJN had resigned because of those allegations as being alleged, “the allegations are still there. They have to be investigated so that we can move forward.

“The allegations can’t just stand in the air. We shouldn’t jump to that conclusion. Let’s wait for NJC to do its work,” he added.

But another former President of the NBA, J B Daudu (SAN) did not want to comment on the issue.

He said the CJN resigned on health grounds and, therefore, there was nothing to say about the development, adding “I can only wish him all the best.”

His resignation rescued the image of S’Court— Owonikoko

However, another senior lawyer, Mr Abiodun Jelili Owonikoko, said: “I think if ill-health is cited as reason for his lordship resignation, we can only wish him a happy and restful retirement.

“That is all we can do. It is too early to speculate about other reasons that have not been officially made public.

“What is left to say is that for that high office, events of the last few months will unsettle anybody that has integrity regardless of what might have actually happened.

“So, he has by throwing the towel at this time in a way rescued the total image of that institution (the Supreme Court).

“It shows that for people of honour, whenever their integrity is challenged or questioned, they will do what is right and put the institution above their personal interest.

“I hope other public officers of high standing like the CJN in other arms of government when the occasion calls for it, will have the respect for due process and institutional integrity.

“There is no doubt that what has happened is not tidy which got to a point that all justices put the weight of their collective displeasure across to the head of the court.

“Hopefully, whoever is coming either as substantive or in acting capacity would have learnt one or two lessons, especially all of them who collectively cried out for a change,” he added.

Justice Tanko is a Fulani, born on 31 December 1953 at Doguwa-Giade, a local government area in Bauchi State, Northern Nigeria.

He attended Government Secondary School, Azare, where he obtained the West Africa School Certificate in 1973 before he later proceeded to Ahmadu Bello University where he received an LL.B. degree in Islamic law in 1980.

Justice Tanko began his career in 1982, after he was called to the bar in 1981, the same year he graduated from the Nigerian Law School.

In 1989, he was appointed as Chief Magistrate of the High Court of the Federal Capital Territory, a position he held until 1991 when he became a Judge at the Bauchi State Sharia Court of Appeal.

He served in that capacity for two years before he was appointed to the bench of the Nigerian courts of appeal as Justice in 1993.

He held this position for 13 years before he was appointed to the bench of the Supreme Court of Nigeria in 2006 but was sworn in on 7 January 2007.

This was barely 24 hours after National Judicial Council (NJC) recommended him to the president.