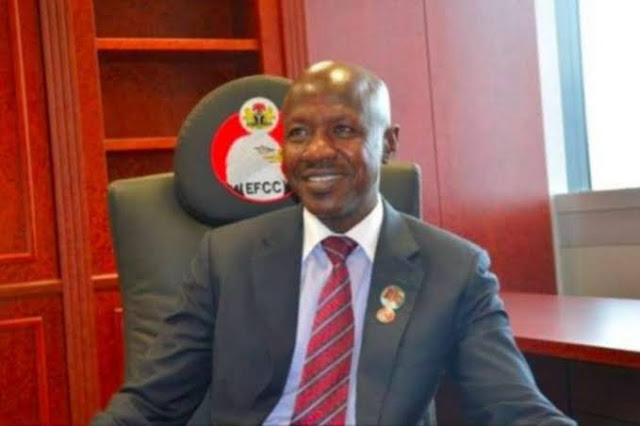 Some key countries in Nigeria’s fight against corruption have shown interest in the ongoing probe into activities of the Economic and Financial Crimes Commission (EFCC) under suspended acting Chairman Ibrahim Magu.

They are monitoring the process of the investigation, how Nigerian officials are dealing with Magu.

For one week, Magu has been detained. He was accosted on the road in Abuja and dragged to appear before the Justice Isa Ayo Salami Presidential Investigation Panel, which is probing allegations levelled against him by Attorney-General of the Federation and Minister of Justice Abubakar Malami.

The statement said: “It is falsehood that Magu placed N550 billion recovered loot into a deposit account.

“The alleged transaction never featured in the proceedings before the Salami panel. Magu was never confronted with any such allegation by the panel and the news is blatant falsehood.

“To the best of Magu’s knowledge, no such amount is in any such account and he remains aghast at such outrageous figures. No one has confronted Magu with such allegations.

“All recovered funds are lodged in the Treasury Single Account (TSA) with the Central Bank of Nigeria (CBN). Such recovered funds do not generate interest. This is elementary and can be verified from the CBN and the federal ministry of finance.

“This can also be confirmed from other government revenue generating agencies. Funds kept in TSA account do not generate interest.”

Investigation by The Nation revealed that the United Kingdom, the United States and others are closely monitoring development on the allegations against Magu and the activities of the Presidential Investigation Committee.

There are some investigative cases in which Nigeria and some of these foreign nations are collaborating on.

Looted funds, which Nigeria is battling to recover, were stashed away in some of these countries.

A top diplomatic source said some of these nations are taking their time to monitor what is going on which is why they have not issued a joint statement on the development in EFCC.

The source said: “Despite the fact that we have our individual intelligence on the development in your country, we are sitting and watching what is going on at the investigative committee.

“We want to know if the allegations against Magu are true; if the process of investigation is in conformity with international best practices; whether there is fair hearing and the implications of the challenge at hand for the anti-corruption campaign in your country.

“We are as curious as every Nigerian in knowing the truth about all these allegations. Ultimately, we desire strict commitment to the Rule of Law, social Justice, upholding the fundamentals of democracy and human rights, fairness and equity to all and a corruption-free Nigeria.”

Another senior diplomat, who has deep knowledge of Nigerian politics, said: “My country knows a lot about power play in Nigeria (even as it may apply to this case) but we are careful in dabbling in the affairs of your country.

“We are being meticulous in monitoring the fact-finding committee because its findings and recommendations might determine your commitment to the anti-graft activities.”

An expert in one of the international agencies said: “All members of the Diplomatic Corps, global financial institutions and donor agencies are interested in the ongoing investigation of EFCC’s activities under Magu.

“We have been comparing notes at the diplomatic level, especially by countries like the UK, the U.S., France, Switzerland, Italy, UAE and others. We are giving all the parties the benefit of the doubt, even though the activities of some political office holders are predictable in this circumstance,

“Whatever is the outcome, it will assist in reaching conclusions on where Nigeria is headed in fighting corruption and ensuring justice.”