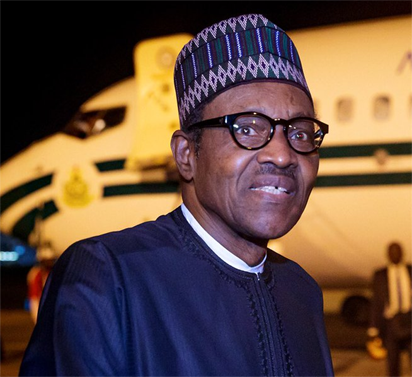 Buhari
A coalition of presidential aspirants of the All Progressives Congress, APC, has rejected the primaries  of the party of  September 28 that threw up President Muhammadu Buhari as the party’s presidential candidate.
A  statement  by Alhaji Mumakhhai Unagha and Dr S.K Ogbonnia said it was wrong for the party to declare Buhari as its sole presidential candidate.
“We, the presidential aspirants under the platform of All Progressive Congress (APC) in the 2019 general elections, henceforth, referred to as the Coalition Of The 2019 APC Presidential Aspirants, hereby reject the APC presidential primary election purportedly held on the 28th day of September, 2018”, the statement said.
According to them, the claim that Buhari is unopposed as the flag-bearer of the APC for the 2019 elections  was not only grossly disingenuous but also a figment of the imagination of what they described as “latent  lackeys grandstanding as presidential handlers. The truth is that we neither stepped down for the president nor suspended our ambition to be president under the platform of the APC in 2019. Buhari is merely being imposed, but such plot will fail.
“Second, denying qualified citizens their right to seek public office is constitutionally ultra vires. Neither the Constitution of the Federal Republic nor the Constitution of the APC promotes prohibitive nomination fees, which the Adams Oshiomhole-led National Executive Committee is employing to exclude thousands of party faithful, particularly the youth and women, from exercising their right to seek public office.
Neither the Constitution of the Federal Republic nor the Constitution of the APC recognizes the bogus clause, Right To First Refusal, which the party leadership assumed to sideline Buhari’s fellow aspirants from the presidential primary. It is also worthy of note that, while the idea of the “right to first refusal” is promoted for the executive office of the president, the opposite is the case for the executive offices of the governors where notable relatives of party leaders, including Buhari’s in-laws, are aspirants.
“Third and very critically, there was no level playing ground in the party’s screening exercise. While serving ministers and governors were subjected to a rigorous screening exercise, no attempt was made whatsoever to re-evaluate President Buhari’s qualifications, with special attention to his educational and other certificates, state of health, fidelity to the party as well as national principles in context of the Nigerian multiethnic state, and much more”.