Although the leadership of the ruling All Progressives Congress (APC) has directed its members in the senate to oust Senate President Bukola Saraki, TheCable understands that the senators are more interested in restoring peace to the upper legislative chamber than doing this. 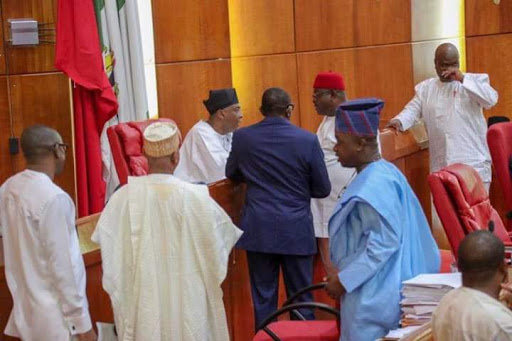 Saraki has been under pressure to step down since he defected to the Peoples Democratic Party (PDP) from the APC.Adams Oshiomhole, national chairman of the APC, had asked senators of the ruling party to remove the senate president.
“Saraki will not be the first to be impeached and I doubt if he is going to be the last but definitely he will be impeached according to law and according to the democratic norms. The only way Senator Saraki can avoid impeachment is for him to do what is honourable by stepping down,” Oshimohole had said when the national assembly was on recess.
On Monday, Ovie Omo-Agege, an APC senator from Delta state, had said the nation’s number three citizen would be removed at the slightest opportunity.
His utterance on the eve of resumption of the parliament after more than two months had given the impression that the lawmakers were in for a stormy session.
But when the senators resumed on Tuesday, they went into a closed-door session. Sources told TheCable that the issue of calming frayed nerves was the major agenda of the meeting they had.
A legislative source said despite the provocation over the defection of the senate president, the lawmakers agreed to sheathe their swords and give peace a chance.
“The senators have seen that the APC is not even fair to them… Frank discussions about the future of the eighth senate as it goes into its last stage held at the closed-door session,” the source said.
“They agreed that nothing would distract them till the end of their tenure.”
Another source said the leadership of the APC caucus in the upper legislative chamber got a promise from Saraki that national interest would be paramount in the dealings of the senate.
“Following their closed-door meeting, the senators agreed not to allow external forces to cause disaffection or disturbance within the legislative arm of government,” the source said.
Efforts to reach Omo-Agege and Abdullahi Adamu, senator representing Nasarawa west, to get their reactions to the development were not successful as their phones rang out and text messages were not replied.
Omo-Agege and Adamu have been on the frontline of the anti-Saraki campaign.
Yusuph Olaniyonu, spokesman of the senate president, was not also available for comments as his telephone line was out of reach as of the time this report was filed.
TheCable