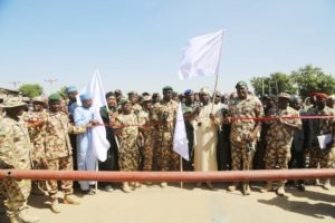 The Nigerian Army on Tuesday reopened the Maiduguri – Damboa – Biu Road for public use, assuring motorists of safety.

The road which link Maiduguri to southern part of the state as well as Gombe and Adamawa States was closed for over 10 months due to the ongoing clearance operation against remnants of the Boko Haram insurgents.

The state deputy governor, Alhaji Usman Kadafur, who spoke at the re-opening ceremony of the road, commended the army in ensuring that the road was reopened.

Kadafur lauded the Chief of Army Staff (COAS), Lt.-Gen. Tukur Buratai, over his commitments to end insurgency and restore peace in the state and other parts of the country.

Kadafur urged the troops and other security personnel engaged in the counter insurgency campaign to be professional in the discharge of their duties.

He also called on commuters to be law abiding, support the troops and provide useful information to enhance security on the road.

Kadafur said that: “I want to thank the Nigerian Army under the leadership of Lt.-Gen. Tukur Buratai for taking this bold decision to reopen the road for the people to commute freely.

“We want to appreciate the Nigerian Army and other security agencies for a job well done and for your support towards securing Borno State and Nigeria at large.

“We thank you for your commitment, and I also want to use this opportunity to call on our commuters to be very law abiding citizens, cooperate with the security agencies while using the road.

“They (commuters) should always give vital information and report any strange movements on the road.

“I am also happy to hear the Theater Commander, Operation Lafiya Dole (OPLD), Maj.-Gen. Olusegun Adeniyi, as saying that the road would now be open seven days a week.

“I am also happy to hear him warning members of the Nigerian Union of Road Transport Workers (NURTW), that they should not in any way extort commuters in the name of securing the road or giving incentive to the troops.

“Please you should try as much as possible to avoid all these things since we have good relationship with the military and other security agencies”.

Also speaking, Buratai, said that the road was being reopened for the second time as it was first opened in 2016 and later closed again for strategic reasons.

He explained that the decision to close the road in 2019 was to allow for freedom of action of troops to be able to contain the attacks on the road by the Boko Haram terrorists.

Buratai said the initial closure of the road was to strengthen the war on insurgents and not to deliberately cause hardship to the people or prevent them from carrying out their economic activities.

“It was done for operational exigencies as well as to continue to safeguard the lives of the law abiding citizens of this state and of courses our country.

“Today’s reopening is quite unique in the sense that we have achieved the objective of the closure of the road and henceforth, the road will be opened all the days of the week.

“I want to commend the effort of the state government for blazing the trail to see that this road is further reinforced with additional vehicles and the deployment of the Civilian Joint Task Force (CJTF) and vigilante to support the efforts of the military in securing this road and indeed all other roads across the state.

“We must acknowledge the contributions of all the other services, the Nigerian Navy and the Nigerian Air Force (NAF), because the service is not left behind in providing the aerial surveillance and cover along this road as the commuters use the road,” he said.

Buratai stated that the road was not only opened from Maiduguri-Damboa, but equally from Damboa-Biu, assuring that troops had been directed to provide all the needed security in all the axis.

The COAS also emphasized that the re-opening of the road would not lead to suspension of military operations on the route.

“We will still continue with our operations and even if we are going to interfere with movement, it is going to be for a very short period in order to protect the people plying the road.

“So, be rest assured and travel with confidence. We have strategic locations where troops are deployed, the police and CJTF are deployed to provide the needed security”, he added.

On his part, Adeniyi, urged commuters to take the road as their own and always avail security agencies with useful information on Boko Haram activities.

Adeniyi also urged the drivers to shun any act of compromise with the Boko Haram terrorists by helping them with fuel, spare parts and other logistics.

He also warned members of NURTW against extortion of commuters in the name of security, adding that anyone caught would be treated as a criminal.

“As this road opens today, all hands must be on deck for it to remain so open.

“I will like to urge all commuters plying this road to take it as their own and always avail the theater command and other security agencies all the necessary information that could help us keep the road open.

“I also want to reiterate the need for drivers to resist attempt of blackmail by the Boko Haram insurgents, asking commuters to drop fuel for them by the road side or buy spare parts for them for the propagation of their heinous criminal acts.

“Army headquarters have adequate provisions for our logistics, so extorting money from commuters is bribery and it is criminal,” he said. (NAN)