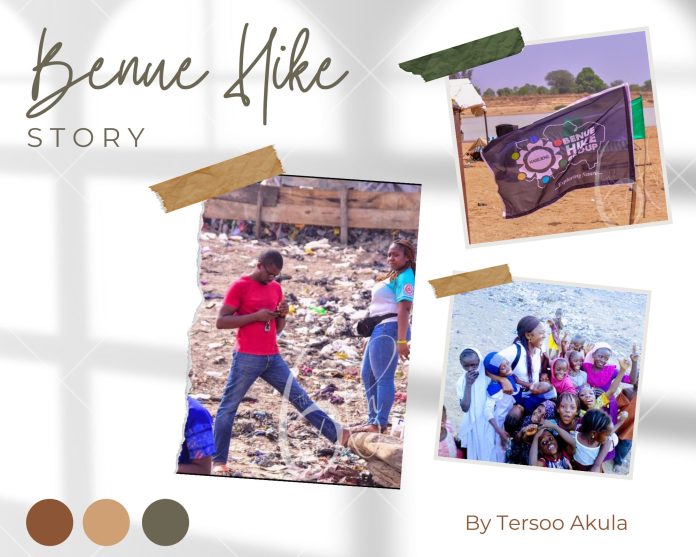 I am not typically a Makurdi person as such, but I have had my stint staying in the town. I like to think I am more of an Adikpo person.

Wadata is a slum in Makurdi that seats on the bank of The Benue River. Well as a slum, you expect slum things. For some strange reasons, nothing has ever brought me to the area, in fact for a long time I never knew the exact location of the area.

But all that changed on the 2nd January of this year, 2022. We planned to have a picnic in the Benue River so along with Terna Ade, Faasema Terfa, Sophie Torhee, Rose Azege and Iorja we went scouting for a suitable location.

It was Terna Ade who led us to the post of the marine police. After stating our intentions, they recommended we use Goso, an island just off of Wadata. I immediately felt uncomfortable, I wanted sometime up stream around Wurukum, but the police won’t budge, they told us that downstream was safer and Wadata is better policed and access is good, hence it was safer around Wadata. Still not convinced we decided to go look up the place ourselves.

That would be my first time in the heart of Wadata.

We drove behind Johh Holt. We observed the abandoned docks and jetties used during the colonial era to load and offload goods. We saw the huge warehouses lying waste. We noticed how an otherwise busy and commercial area now lies in ruins! It was very obvious that we have not been able to build even on the foundations laid for us by our foregoers.

I imagined that most of the poverty in my state is manmade. Because, the state is blessed in many ramifications. I wondered how this can be turned around, and by who?

There are many ways to do this. But I sense this is not on anyone’s agenda.

We have free oil money, this has made us lazy, so lazy that we are wasting generations through idleness because we have refused to create a world where we all can be productive. Crime therefore remains a veritable tool in bargaining economic advantage.

We communed down the Tipper garage, after the market and finally, down the dirty street that led to the point where people are ferried across the river to different locations.

What first hit me was the high level of waste collected along the bank of the river which emitted foul smell. I saw very poor hygiene as people almost in the same spot were bathing, pooing and washing plates. This caused serous nausea for me but it looked normal to them.

I noticed also that most houses around the banks had no toilets. Waste was thrown into the river at will and careless abandon. How there is no jetty in this place defiles human logic and understanding. In the mist of this dirt, life goes on.

We hit up a bargain with one of the ferry pilots whom we later got to know as Umar. He ferried us across two different spots, after which we settled for Goso because it had space for the various games we intended to play and could accommodate the numbers we were anticipating.

Goso itself has had serious spillover of pollution from the Wadata area.

After negotiating with the locals on what we wanted to do at the picnic area, we left Wadata.

I would not return to the place again till the morning of the picnic. It was the same scenario.

The only difference this time was that we were joined by children from the community who were excited to be part of the event. How they got to the island from Wadata remains a mystery to me, but they were on the island in their numbers.
They were willing to help us do whatever we needed them to. They carried stuff, dug holes for poles, Set up canopies and later cleaned the waste we left behind. We on our part showed them appreciation both in kind and cash. One of the kids exclaimed about the pack of rice he was given “this rice make sense I swear”.

I watched these kids and like often in situations like this, I thought what the future holds for them. How the billions of Naira from our national and state budgets affect them? No health care, no food, no education here, they are scavenging food from total strangers on the banks of a place most of them know all their lives to be the world. It was a sad reality for me, a reality at this point through their innocence were oblivious.

We also had encountered the youth of the place who were insisting we should have paid a fee for using their island. We paid for having them watch over the cars of participants. For me they were fair. If they had connived to vandalize our cars, the damage would have been more, but they asked to watch over the cars, and we met the cars intact and no case of vandalism was reported.

What I learned
• Benue has great potential in tourism, imagine just imagine that we had a beach in Wadata that tourist would come and go on a daily basis. Cleaner river banks. A lot of those youth hanging idle there would be employed. A lot of vendors would be there selling food, souvenirs etc, the boat cruises would also bring revenue, etc.
• Why not transform the huge waste along the bank to biofuel?
• Whose responsibility will be to clean the banks of the river? Plastic is affecting the aqua life of the river negatively
• Death of fish -we were told that there is over-fishing going on at moment in the river, who regulates this?

The picnic has come and gone but it has left me more with a heavy heart than when I should ordinarily be happy due to its success.

My eyes were opened into the decay that has affected every sector of our state life. We can play all the politics all we want, but developing our state is not just about politics, it is about policies, programmes and projects. It is about long-term planning, sacrifices, delayed gratification and above all discipline. Not just of the leaders but the followers too. There is no magic wand to get us out of this quagmire, only willing hearts and hard-working hands, faith in God and hope in ourselves.

Eric Donalson is right; though we have made so much money as a State since this democratic dispensation, “but the progress you make is sadly not always how rich you are.”

About the writer
Tersoo Samson Akula is a development worker, currently The Keeper of Benue Hiker Group. The group promotes, outdoors activities, tourism in Benue and also environmental protection.