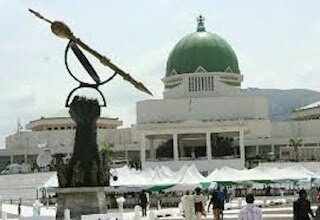 Sen. Abdullahi Adamu has formally resigned his position at the Senate to enable him concentrate on his job as the National Chairman of the All Progressives Congress (APC).

This is contained in a letter to Senate President Ahmad Lawan,read at Tuesday’s plenary.

Adamu said he was leaving due to his election as APC National Chairman.

“Letter of Resignation from the 9th Senate.

“And with utmost respect and appreciation, I inform you that consequent upon my victory as National Chairman at the just concluded convention of our great party, the APC, on March 26, I hereby formally resign as a senator of the Federal Republic of Nigeria representing Nasarawa West Senatorial District with effect from April 1.

“I feel a sense of duty and obligation to convey through this letter, my appreciation for the cooperation and guidance I received from you as Chairman of the National Assembly throughout my official and private association with you.

“As I leave the Senate, I cannot easily forget the change and style of leadership that you brought since becoming the Senate President of the 9th Senate,” he said.

Adamu added: “Your ability to forge the deep-rooted, bipartisan approach on all issues over which you chaired deliberations, speaks volumes of your chemistry as a leader.

“Since your assumption of your chairmanship of the national assembly, you have worked so hard for the assembly to be seen to work with the government and not against it.

“Indeed, you have strongly proved that the three arms of government are truly arms of the same national government.

“You have steered the national assembly to do the bidding of our great party without prejudice to the other parties irrespective of the size of their representation.”

“I’m writing formally to inform you of my resignation from the Senate of the Federal Republic of Nigeria as Senator representing Borno North Senatorial District.

“This is as a result of my victory at the convention of our party, the APC on March 26 where I emerged as Deputy National Chairman, North.

“I’m humbled by the fact that my constituents have repeatedly reposed their trust in me to be their voice; to advocate for their economic, social and political rights.

“I will never forget my distinguished colleagues and the staff of the Senate Committees, chamber and the national assembly I have met, the relationships I build and development over the seven years of my stay as a senator.

“I’m deeply appreciative of the Senate under your sound leadership and for the opportunity given to me to serve as the Chairman Senate Committee on FCT, ” he said.