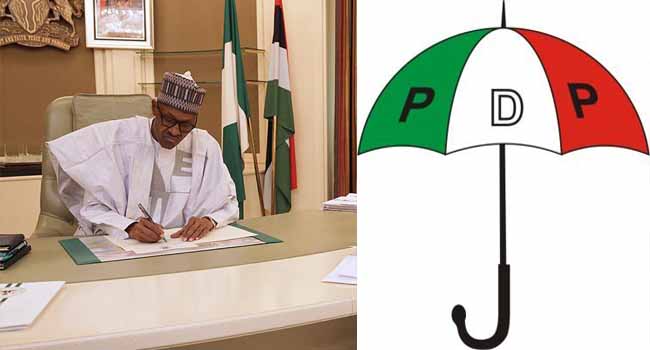 The Peoples Democratic Party (PDP) says the Federal Government’s ban of 50 Nigerians from travelling abroad is a direct clampdown on democratic order.
In a statement on Saturday, the PDP’s National Publicity Secretary, Kola Ologbondiyan, described the restriction as an attempt by the Buhari Presidency to foist a full-blown fascism on the country.
“We hope this is not a ploy to harm certain eminent Nigerians on the claims of resisting travel restrictions. The PDP further notes that this “decree” is a direct clampdown on our democratic order and an overthrow of rights of our citizenry as guaranteed by the 1999 Constitution (as amended),” the statement read in part.
The party also stated that the presidency has gone into panic mode since the emergence of Atiku Abubakar as the PDP presidential candidate.
It, therefore, stressed that any attempt to clamp down on the opposition will be totally unacceptable, adding that no amount of intimidation and harassment will deter Nigerians from ousting the APC administration.
The PDP’s comments follow the implementation of the Executive Order (6) signed by President Muhammadu Buhari, to prevent government officials from engaging in corrupt practices.
The order seeks to restrain owners of assets under investigation from carrying out any further transaction on such assets.
According to a statement issued on Saturday by the Senior Special Assistant to the President on Media and Publicity, Garba Shehu, following the implementation of the order, 50 prominent personalities (whose names were not stated) were placed on a watch-list and, therefore, restricted from leaving the country pending the determination of their cases.