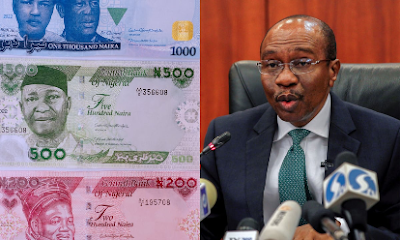 Godwin Emefile, Governor of the Central Bank of Nigeria, explained the features of the new notes.

Emefiele told a State House correspondent that this is in line with global best practice and Naira said he would have to redesign and reissue every five to eight years.

In his opinion, it is unfortunate that the Naira has not been reformed for the past 19 years due to lack of political will from previous governments.

“I must confess that so far there has been resistance to attempts by the CBN to redesign and reissue naira notes. Only President Muhammadu Buhari has shown the courage to do so,” he said. said. Emefiele said it is CBN’s mission to redesign and reissue banknotes, stressing that in five to eight years the exercise will become a regular trend.

In his words: “From today onwards, CBN will begin redesigning and reissuing Naira every five to eight years.”

The CBN governor said Nigeria is going cashless and that security agencies will monitor over-the-counter withdrawals to understand how much money is being withdrawn and monitor how the money is being used.

He debunked hints that the policy was aimed at everyone, especially the political class.

He said CBN is determined to ensure that legal provisions regarding amounts to be carried are respected.

“The world has moved to a cashless economy, and so has CBN. Cash withdrawals at the counter are restricted. We track personal data to find out the reasons for such withdrawals,” he said.

Regarding calls to extend the life of old banknotes, the CBN director said, “We will not cooperate with those who want life extension. Starting today, this newly introduced currency will become legal tender.”

Emefiele also said there is no municipality district without a bank agent in the country, and he claimed that there are more than a million places across the country where people should deposit old banknotes.

CBN’s boss also boasted that the new naira notes cannot be counterfeited due to their characteristics.