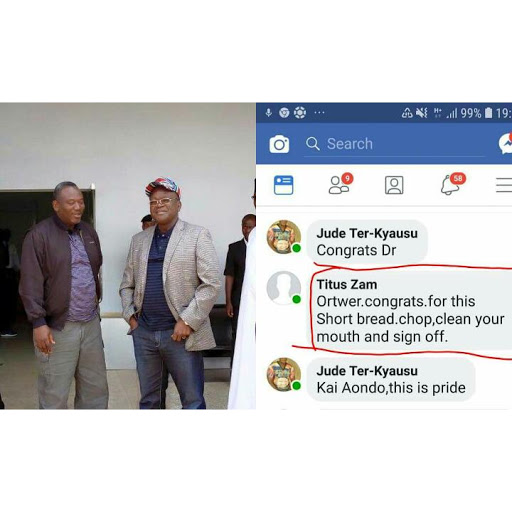 Benue APC governorship aspirant, Hon Titus Zam has explained the meaning of his congratulatory text to Dr Terghter Ayargwer on his appointment by Governor Samuel Ortom.
Recall that Hon. Zam who is also a former Adviser to the Governor in a congratulatory message to Dr Ayargwer said the new adviser should, “chop, clean mouth and sign off” which has drawn public condemnation especially on social media.
The former adviser however said his comments were not malicious but in line with Governor Ortom philosophy of corruption and deception of the people.
He said, “chop clean mouth is Ortom’s PDP philosophy of deploying God’s name and pretentiously quoting the holy book to hoodwink the people while raping the Benue Treasury. In simple terms it’s ortomatic diversionary tactics of Government of deceit and blame game.”

Few days ago Zam was condemned  social media user over his congratulatory statement on the facebook page of a newly appointed Special Adviser to Gov Ortom where he advised the newly appointed adviser to ‘Chop Clean Mouth And Sign Off’….facebook users were disappointed over the reckless statement made by a man who is seeking to be the number 1 citizen of the state.

Titus Zam served Ortom’s government as Special Adviser to the governor on Local Government,he was sacked recently .While serving as Adviser,he was embroiled in many controversies  especially on Ghost Workers.