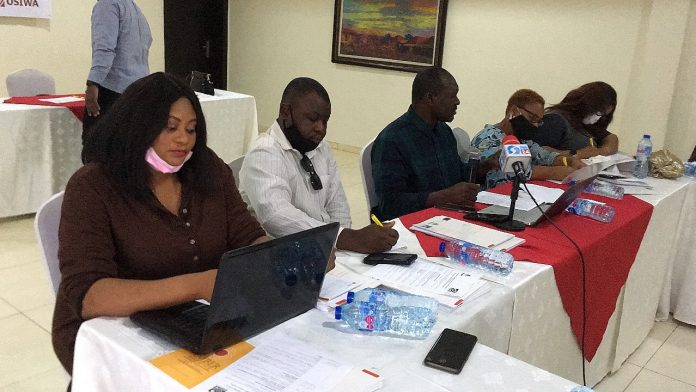 The Civil Society Legislative Advocacy Centre (CISLAC) has called for an end to the declining press freedom in Nigeria.

The Executive Director, CISLAC, Auwal Musa Rafsanjani, on Wednesday in Abuja, expressed displeasure over the increasing intimidation of journalists and attack on human rights activists in the country.

According to him, the recently released World Press Freedom Index by the Reporters Without Borders shows a sharp decline in Nigeria’s press freedom.

“This negative trend is in line with other recently released indexes of the quality of governance and government in Nigeria such as the African Mo Ibrahim Index to quote one case of many,” Rafsanjani said.

by the state and other powerful individuals is unacceptable, and that the human rights and the freedom of journalists and human rights activists should be respected.

“We acknowledge the fact that journalists and civil society leaders have been instrumental to the development of Nigeria. Their investigative reports have helped to unearth corruption amongst other ills in the society and have led in many cases to significant asset recoveries and prevention of grand-scale embezzlement when law enforcement has been unable or unwilling to do so.

every journalists and human rights activists to practice without fear of

“We call on these brave professionals not to be discouraged, but to continue to serve the Nigerian citizens. We call on authorities to resist political pressure and operate within the spirit of the law. We all have a responsibility to ensure that the freedom of media is guaranteed by law and practice,” Rafsanjani said.

WELCOME ADDRESS BY THE EXECUTIVE DIRECTOR, CIVIL
SOCIETY LEGISLATIVE ADVOCACY CENTER (CISLAC) AT THE
MEDIA INTERACTIVE SESSION ON PROTECTION OF CIVILIAN AND
CIVILIAN HARM MITIGATION IN ARMED CONFLICT AT AMBER
RESIDENCE, LAGOS, ON THE 22 nd APRIL, 2021

Protocols!
The importance of a free, professional and plural
media in contributing to Protection of Civilian and
Civilian Harm Mitigation in Armed Conflict has gained
traction in our work. A vibrant media gives people free
flowing access to information, enables dialogue,
encourages people to express their views, prompts
greater political participation and encourages
accountability. Conflicts today are, in many cases,
more complex and multidimensional than ever before.
This has continued to threaten protection of civilians
in various levels. Most conflict deaths occur during
internal wars rather than between states and regular
armies. Over the past decade there has been an
increase in conflict relapse rate. Conflicts are less
likely to be resolved through traditional political
settlements and this is due mainly to the emergence

2 | Page
of organized crime that tends to exacerbate state
fragility and undermine state legitimacy.
Let me say that CISLAC remains deeply concerned by
the high number of acts of violence against civilians in
various theatres of operations across the country. It is
often said that the first casualty of war is truth.
Accurate, impartial media reports conveyed from
conflict zones serves as fundamental to public
interest. In the information era, images and news can
have a decisive impact on the outcome of armed
conflicts. As a consequence, the obstruction of
journalistic tasks in times of armed conflict is
alarmingly frequent. The spectrum of interference is
wide, it ranges from access denial, censorship and
harassment to arbitrary detention and direct attacks
against media professionals.
The velocity of today’s communication often means
that a journalist’s ability to assess critically what is
happening is reduced due to the difficulty of
maintaining a balanced distance from events, leading
to a horrible and potentially dangerous cycle of
misinformation. Expressing observations and opinions
in soundbites and tweets and avoiding rational
discourse and analysis can put civilian in harm’s way.

3 | Page
It is increasingly difficult for organizations to hold back
sensitive information from the public until an
appropriate time. The speed of communications and
competition for audience share makes the media less
likely to play a gatekeeper role by withholding certain
information that could derail potential risk to
vulnerable civilians. The accelerating speed of
communications can have positive as well as negative
consequences.
The continued suffering of civilians, particularly the
effects of sexual violence, loss of livelihood and
constant attacks by non-state armed groups is a cause
for deep concern, children and armed conflict and the
psyche of the children in these environment is a
potential harm to the society. Sexual Violence in
Conflict is a niche issue, protecting civilians from
sexual violence and other conflict-related mayhem is
a step in the right direction. The stories from various
IDP camps and locals in operation theatres are indeed
sore tales.

4 | Page
institutionalize a participatory system that is vibrant,
robust and effective. The nature of the media is
changing rapidly, arguably more rapidly than any
other sector. Media is exploding and flourishing in
Nigeria, with changes happening often very rapidly;
new technologies, and particularly mobile telephony,
are rapidly transforming information and
communication opportunities, including for the
poorest with poorly understood consequences. This
shifting landscape has implications for the role of
media in Protection of Civilian and Civilian Harm
Mitigation in Armed Conflict.
Social media places the audience as both content
creators and consumers: “ordinary” people as
opposed to professional journalists creating user-
generated “news.” In this way it can be emancipatory,
giving voices to those who otherwise may not be
heard, and thus having the potential to become a
significant factor in effective and proactive protection
of civilians. But this open information landscape also
opens the door to abusive, intolerant and oftentimes
malicious discourse. Learning to live with free
expression in a digital age requires a new movement
to help people understand that free speech is not
without some responsibilities.

5 | Page
In conclusion, we are grateful to OSIWA for providing
the resources needed to host this very important
meeting. We are also grateful to all of you for joining
us today. The cooperation we have so far received
from stakeholders has been wonderful, we urge you
all to put into good use robust strategies and skills
gathered here today.. To all of you who have devoted
time to be part of this meeting, again we say thank
you.