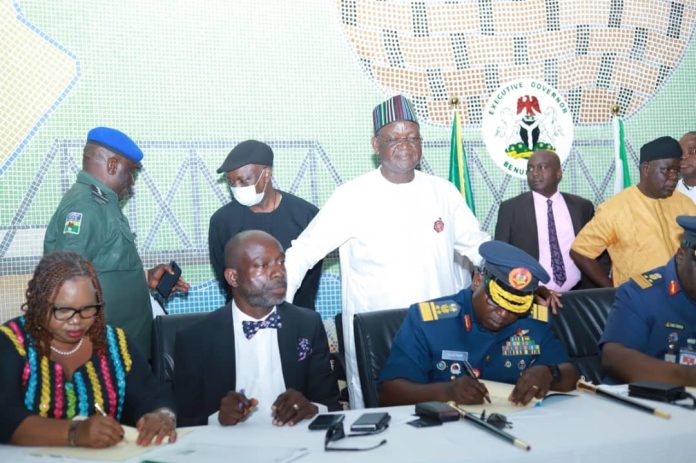 After a long drawn delay, civil flight operations are set to soon resume at the Military Airport in Makurdi, the Benue State capital.

This is sequel to the signing of a ‘Joint Use Agreement’ between the Nigeria Air Force, NAF; Federal Airports Authority of Nigeria, FAAN; Nigerian Airspace Management Agency, NAMA and Nigerian Meteorological Agency, NiMet.

A statement by signed By Jimin Geoffrey from Government House Makurdi,The ceremony which held at the New Banquet Hall of Benue Peoples House Makurdi was witnessed by the Benue State Governor, Samuel Ortom and other top government officials.

Governor Ortom in a remark, described the event as epoch making, stressing that many had wished they had access to the state but couldn’t due to lack of commercial flights and deplorable state of roads.

The Governor who acknowledged the tremendous support of the Nigerian Air Force to the state in areas of security, education, health among others, said the stoppage of civil flight operations was due to lack of proper documentation.

Representative of the Chief of Air Staff, Chief of Training and Operations Headquarters, Air Vice Marshall James Gwani, said the civil flight operations is part of their corporate social responsibility and civil-military relationship, pointing out that economic and social benefits will be enormous.

Company Secretary and Legal Adviser FAAN, Dr Clifford Omozeghian, representative of the MD-CEO said FAAN management is passionate about the opening of the Makurdi NAF Aerodome for civil operations.

He commended the efforts of the Chief of Air Staff and Governor Ortom towards the actualisation of re-opening of the Makurdi NAF Aerodome for civil flight operations, saying it is an expression of sensitivity to the people’s aspirations.

Dr Omozeghian pledged the commitment of FAAN to its responsibilities as stated in the Joint Use Agreement to guarantee the development potentials of Benue and benefits of users.

Civil flight operations according to him include commercial flights, VIP flights, agricultural flights, airlift of electoral materials and staff, medical and emergency patients and personnel as well as airlift of relief materials.

Representative of Air Peace, Ayodeji Ayodele said with the signing of the Joint Use Agreement, Air Peace will be part of December Flight Schedule in and out of Makurdi.