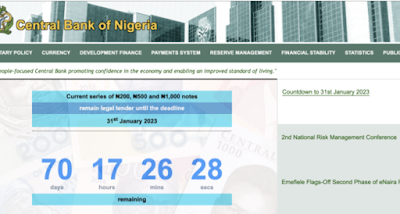 The Central Bank of Nigeria (CBN) has posted a countdown clock on its website indicating the expiration date for three banknotes currently in circulation.
Out of the existing eight banknotes, the apex bank announced plans to redesign, produce, release, and circulate a new series of three banknotes.
The redesigned notes would have denominations of N200, N500, and N1000.
On the new notes, CBN Governor Godwin Emefiele stated that the decision was made due to ongoing concerns about the management of the current series of banknotes and currency in circulation, particularly those outside the banking system.According to Emefiele, one of these challenges is significant hoarding of banknotes by members of the public, with statistics indicating that more than 80% of the currency in circulation is outside the country.