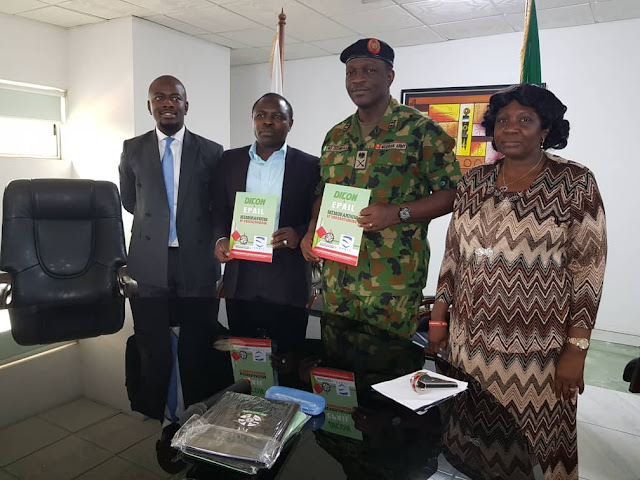 Defence Industries Corporation of Nigeria (DICON), a parastatal under the Ministry of Defence has entered into a strategic arrangement with Equipment Protective Applications International Limited (EPAIL) for the production of defence equipment which include ballistic vests, ballistic helmets among other defence related equipment or items.

EPAIL is an affiliate of MOMAS group of companies that is responsible for the provision of security solutions to essential assets and infrastructure nationwide.

Shortly after the visit, a Memorandum of Understanding (MoU) was signed by the two parties (DICON & EPAIL) that would see to the production of military hardware for the Nigerian military.

According to the joint venture agreement signed by both parties, the arrangement would ensure local manufacture and production of critical military items and defence related equipment as well as transfer of technologies especially in the areas of tool and tooling production which would be needed by the Nigerian military and other security agencies.

Ogunkale therefore praised the EPAIL team for what he described as a world class facility capable of meeting the essential needs of the Nigerian Military.

He said “We are impressed with what we have seen so far particularly with the level of investment in the facility and the fact that it is an indigenous company. In fact, we are proud to be associated with this company as it has given us opportunity to look inward to address the issue of insufficient military hardware”.

He noted that the two companies (DICON & EPAIL) would complement each other by combining technical knowhow with the facility with a view to ensure all the essential defence related equipment are readily made available locally thereby removing a lot of encumbrances associated with importing security equipment into the country.

He said” We are happy to be here and glad that you have the space and the facility. Although the joint venture agreement may not be as deep as you would think, we are hoping that going forward it would expand. For us, we are excited to kick start the agreement as soon as possible. More so, we are glad that EPAIL is ready to provide certification and verification for the security equipment. We believe our partnership with you would be a win-win situation.

“As we speak, some other paramilitary forces such as Civil Defence, Immigration are making great demand for some of the essential defence related items. So, the challenge for us is to meet such increasing demand. I just hope that you as our partner do not delay in providing the essential security items.

“If I may add, I believe with the state of the art research and development facilities we have on ground, your company should be able to work together with us to help bring about new innovations. I believe as we go on, we would have more areas of collaboration”.

In his remarks, the Chairman of EPAIL, Engineer Kola Balogun described the partnership between the company and DICON as a sign of good things to come for Nigeria stressing that EPAIL is ready and prepared to meet the increasing demand of military hardware.

While commending the leadership team of DICON for their commitment to ensure a well-equipped military force, Engineer Balogun stated that he is delighted that the defence parastatal was exploring possible ways to provide military hardware that would be needed to combat hydra-headed security challenges confronting the nation.

“We are happy to be a dependable partner in assisting government to produce military hardware locally. We really appreciate the confidence reposed in us to supply this equipment. It is a clear demonstration of government’s belief on the capacity of local companies to deliver as well as the political will on the part of Buhari’s administration to contain over dependence on unwilling international partners to provide the equipment. We are delighted that this opportunity would not only boost local capacities but also help in making the proposed Military Industrial Complex a reality,” he said.