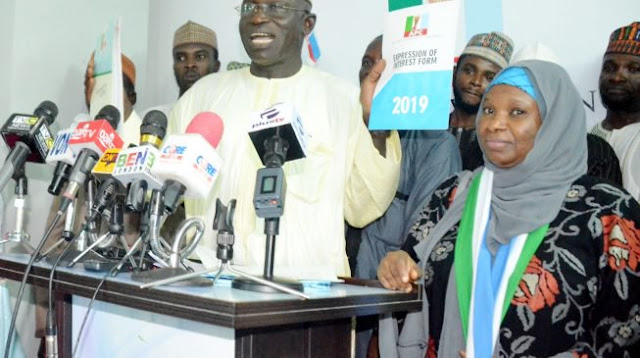 Suleiman Abba, former inspector-general of police, took many by surprise when he led what could be considered a prayer session at the national secretariat of the All Progressives Congress (APC) in Abuja on Monday.
Abba sought to contest the Jigawa central senatorial district election under the platform of the party in 2019 but was disqualified shortly before the primary.
He stormed the party headquarters to register his displeasure with the leadership of APC for screening him out of the race.
Addressing journalists after this, Abba prayed to God to remove those officials who are “hell-bent to destroying the vision and legacy of the party”.
“You are aware that a list was released where I was duly cleared and another list was released without my name,” he said.

“This is not the time for too much talk; this is time for prayers and I want you to join me in this prayer. The prayer is this: Almighty God , any person copying you and your power should not be in the headquarters of this APC. Almighty God, if there is already one, you know what to do so that you don’t allow him continue copying you.
“Almighty God, any person claiming to be an officer of the APC if he will not work with the vision and mission of the APC, almighty God don’t allow him to use the demon style to destroy the party.”
Former President Goodluck Jonathan removed Abba from office after the 2015 election. He was accused of hobnobbing with President Muhammadu Buhari.