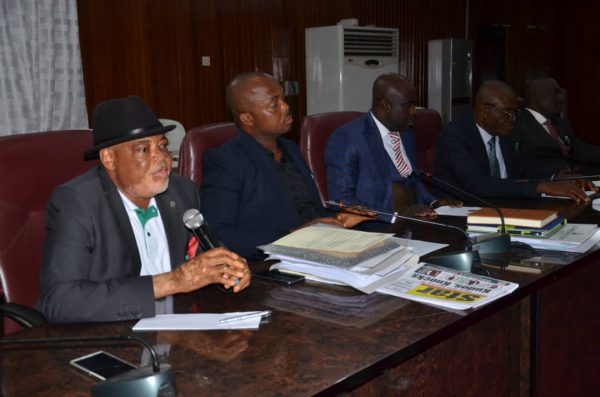 The Ebonyi State Government has approved the granting of soft loans to operators of unregistered schools in the State to enable them fulfill their registration requirements.
The Commissioner for Education, Hon. Sabinus Nwankwagu, disclosed this at the Executive Council Chambers, Government House, Abakaliki, while briefing journalists on the outcome of State Executive Council Meeting held on Wednesday.
Nwankwagu, who observed that Government’s decision was based on the determination of the present administration in the State to totally reposition the education sector for optimal results, noted that these schools were being patronized by Ebonyi State children and as such requires legal upgrading.
He advised all operators of such illegal schools, who have met the set standards, to liaise with the Ministry of Education for documentation, warning that they have been given 90 days ultimatum to complete their registration processes or risk closure.
Nwankwagu explained: “Some of these unapproved schools, those which may meet up the standards so set, should approach the Ministry of Education for documentation, first.
“Then after the documentation, Government has approved for a soft loan to enable them do the needful putting into consideration that there is a law in place that if you are operating a school that is not approved by government, there is a section that prescribes six months imprisonment
“The executive council believes that such schools are for Ebonyi children and because of that, it approved that they should be give a loan to fast track and make sure that they get some of these schools approved.”
The Commissioner however, did not disclose the range of the loan amount to be granted to the operators.
The State Government had earlier set up a Committee chaired by the Head of service, Dr. Chamberlain Nwele, to look into the proliferation of illegal schools across the State.
This decision by the Executive Council was based on the report submitted to it at the meeting by the committee.