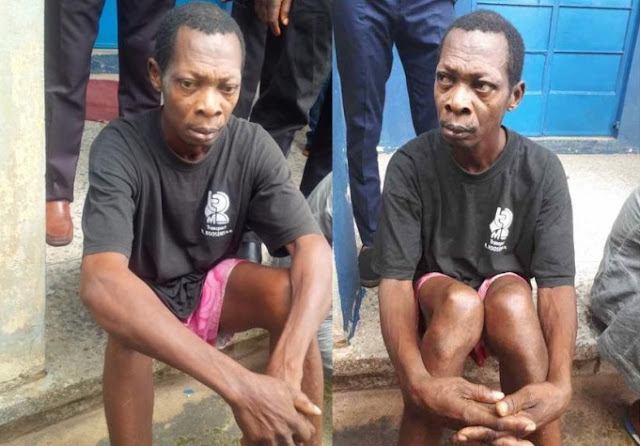 It was gathered that Moses, who hails from Cross River State, but resides in Edo State, had been sleeping with his daughter since she was 7 years old.
It was further revealed that the victim, a primary six pupil, lost her mother five years ago and has been living with the suspect, who constantly abused her s*xually.
It was learned that the suspect was driven out of Ologbo community when the people discovered that he was sleeping with his daughter. .
According to sources, when the community members discovered that the girl was pregnant for her father, they informed the Police, who later arrested him.

Speaking with journalists, Precious, who is five months pregnant, said: “My father slept with me five times. He started when I was very small. He started by touching my waist. When I said no, he said if I shout he will use cutlass to kill me.
Some neighbours saw me and took me to the community leader in our area at Okha, where they asked me what happened to my stomach. I didn’t know what they were saying.
They asked me when I last saw my menstrual period. I didn’t understand what they are talking about, until the police told me I am pregnant and asked me who did it. I told them my father sleeps with me at night.”
However, Friday denied sleeping with his daughter, saying the minor told the community that he was the one that impregnated her, which is not true. He said: “I have a girlfriend.
But when people came to my house and beat me up, claiming I was going out with a married woman, I abandoned her. I did not impregnate her, but take it the way she said it.”