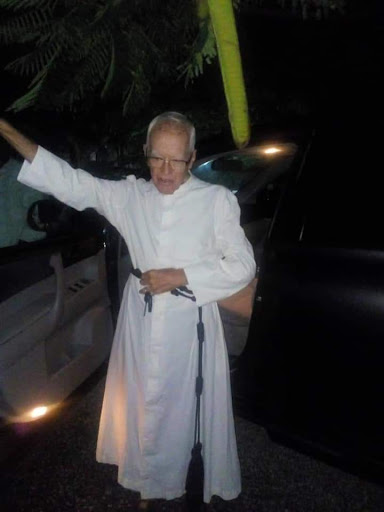 Fr Fraser passed away this evening 7 october 2018 at Princess Royal Hospital in UK.A statement signed by Fr Jude Ortese for Chancellor says Fr Fraser died after a brief illness.
He was the founding principal at tge prestigious Mt St Gabriel’s Sec Sch Makurdi Benue State.
Rev. Fr. Angus Fraser, C.S.Sp.is the longest serving principal of the school. He was appointed principal of the school on July 9, 1971. It was during his tenure as principal that additional blocks of buildings, including the staff quarters and the iconic-two storey building itself were built. By so doing, he expanded upon the initial foundation that was laid by his predecessors to much of what is still obtainable in the school compound today.
Father Fraser served as principal of the school for 43 years during which he ensured that the standards of academic excellence, the fear of God the Father Almighty, discipline, morality and much of the standards which the school is known for, were properly laid and secured for the benefit of the students and the society.
As a priest, Father Fraser regarded all students as his children in Christ Jesus such that he spared nothing in working to ensure that they received the best standard of education. While he was principal, many of the students whom he admitted were inspired to the Catholic Priesthood. They later graduated and went on to become priests.
Two of them are now Catholic Bishops, namely: Bishop William Amove Avenya of Gboko Diocese and Bishop Peter Iorzuul Adobo of Katsina-Ala Diocese. Father Fraser made sure that all students were put through a rigorous regime of academic exercises that were punctuated at regular intervals by prayers and other spiritual activities approved by the Catholic Diocese of Makurdi. Thus, out of the about 10,000 students that the school has graduated so far, most of them benefitted from the discipline they learnt under him. Illustrious old boys reflect this training in their attitudes, and their accomplishments are a living testimony to everyone that hard work, honesty, dedication to duty, the fear of God and the disposition to serve instead of being served is what is expected of them by Jesus Christ. Father Angus Fraser retired as principal of the school in 2014 and moved to UK until his death.
Below is the statement
We are saddened to announce the death of Very Revd Fr Angus Frazer, CSSp, The founding Principal of Mt St Gabriel’s Sec. School Makurdi and founder of Via Christi Society. He died this evening, 7th October, 2018 by 7:30pm after a brief illness at Princess Royal Hospital, Farnborough near Orpington, United Kingdom where he went for treatment.
Burial arrangements will be communicated later.
Ortese Jude Ortese CSSp
Fr Chancellor.