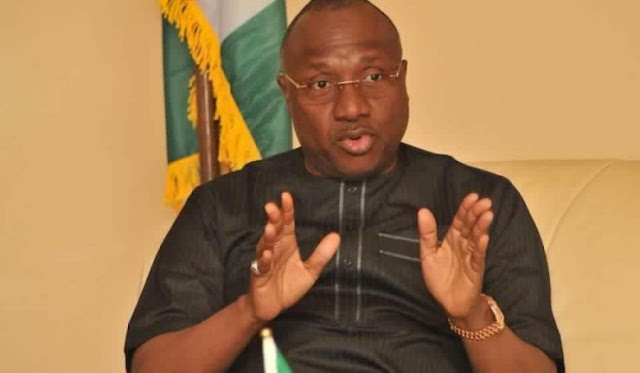 Muhammadu Bindow, governor of Adamawa, has emerged winner of the All Progressives Congress (APC) governorship primary election in the state.
He earned 193,656 votes to defeat two other candidates.
Ahmed Jibrin, chairman, APC committee on the primary election, said Halilu Ahmed scored 15,738 votes while Nuhu Ribadu came third with 8,364 votes.
He said: “I, Ahmed Jibrin, chairman committee of the APC Adamawa governorship primary election with the power conferred on me and my members by the national secretariat declared Muhammadu Jibrilla Bindow as the winner of the Adamawa governorship primary election with the total of 193, 656 votes.”
Ahmed, Aisha Buhari’s brother, has kicked against the primary election, calling for its cancellation.
Ribadu had also cited various irregularities in the exercise. He said party members in all the 226 wards of the state could not vote.
The former EFCC chairman had initially pulled out of the governorship race, arguing that the exercise would not be free and fair.
He, however, backtracked when the election was rescheduled.

But after the exercise on Saturday, he said, “the electoral process was completely hijacked across the state”.
Ribadu added: “Thousands of our supporters trooped to all the 226 wards early enough on Friday to exercise their rights. They waited for hours under the sun till the sunset without sighting any official.
“Personally, I visited some of the wards within the metropolis where we met anxious people that were angry at the absence of persons that would coordinate the elections. It is similar report we got from our agents from across the state.
“The election materials distributed at the local government headquarters were hijacked by government officials and party leaders, who went on to fill out funny figures and return them to the returning officers as results from the wards.”
Ribadu called on the national working committee (NWC) of the party to declare all the results null and void.