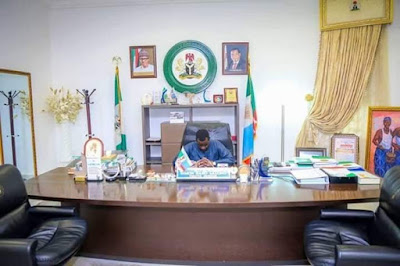 Governor Simon Bako Lalong has asked Plateau citizens to forgive his Government where they have erred as they are human and bound to make mistakes as he promises to bring perpetrators of Violence to justice.
Lalong was responding to the affirmation of his candidature as the sole bearer of the All Progressives Congress ticket for a second tenure by delegates of the party in Jos.
“For those I have offended pls forgive me and for those that offended me I have forgiven you
“I would never let plateau people down , I would always continue to stand by my people at all times”
Delegates of the All Progress Congress APC in Plateau state on Sunday affirmed ,Governor Simon Lalong as the party’s flag bearer in next year’s Governorship election.
Moving the Motion to affirm Governor Lalong ,the speaker of the state house of assembly Hon Joshua Madaki said because of the security situation of the state and Lalong been the sole aspirant ,he should be affirmed ,the motion was seconded by the former deputy Governor of the state Pauline Tallen .
Speaking after the affirmation ,Lalong thanked the delegates for the confidence reposed in him .
He said “I see a very clear future of Plateau , we shall overcome all the challenges facing Plateau , I want to thank the people of the state for their support ,and appealed to the people of the state to continue to support me at a times .
He also promised to support and promote programmes that would improve the quality of life and deliver the dividends of democracy to the people of the state.
State chairman of the party in the state, Hon. Latep Dabang commended the peaceful nature of the exercise .
He maintained that Lalong has done well enough to be affirmed and urged citizens to vote for the party come 2019, to build on his achievements