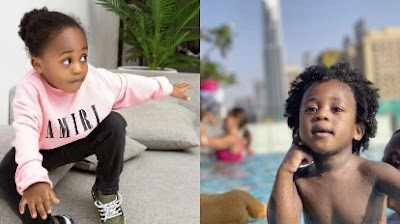 An autopsy on Davido’s son, Ifeanyi Adeleke, revealed that the boy drowned.
Ifeanyi, Davido’s son with Chioma Rowland, was reported to have drowned in a pool on October 31.
According to reports, the incident occurred at Davido’s home in Lagos’ Banana Island highbrow.
The three-year-old was rushed to a hospital in Lekki, where he was pronounced dead on arrival.
It was also reported that Davido had left for the United States and Chioma had gone to Ibadan, leaving Ifeanyi with a domestic assistant.
Police interrogated eight of Ifeanyi’s domestic workers, including his nanny, after his death.
Two more people, the nanny and his cook, were later detained while the others were released.
The results of an autopsy on Ifeanyi, according to Lagos police PRO Benjamin Hundeyin, arrived on Friday.
“The autopsy has been completed, and it has been determined that the boy drowned.” Although it was completed yesterday, the investigation is still ongoing. “The two detainees are still with us,” said a police spokesperson on the phone. Earlier, social media users claimed that the actress Eniola Badmus had been arrested in connection with the case. When asked about it, Hundeyin said there is no link between the film star and the police investigation. “The people who brought it up are in a position to discuss it.” I’m not sure how Eniola Badmus got involved in this. In both of our case files and statements. There is no mention of Eniola in the statements. “There was no arrest,” he said.