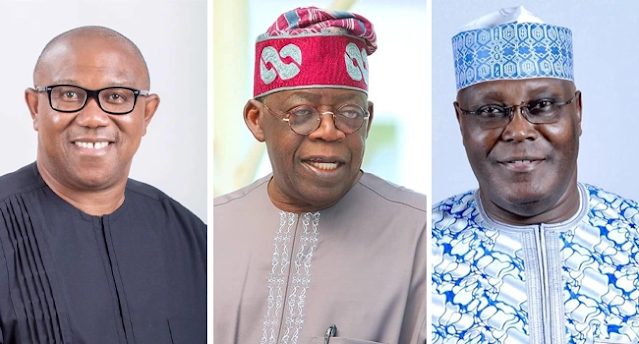 The Independent National Electoral Commission (INEC) has released the final list of candidates contesting for the presidency in the 2023 general elections.
This is according to a circular released by the electoral body on Tuesday in Abuja.
The INEC circular also included the candidates’ state of origin, age, qualifications, and other details, as well as that of running mates.
Among those cleared by the electoral umpire are Atiku Abubakar of the Peoples Democratic Party (PDP); Bola Tinubu of the All Progressives Congress (APC), Peter Obi of the Labour Party (LP), and Rabiu Kwankwaso of the  New Nigeria Peoples Party (NNPP).
INEC 2023 Presidential Candidates’ List
Below is the final list of candidates for the 2023 presidential election as published by INEC:
1. Imumolen Christopher  – Accord Party (AP)
2. Al-Mustapha Hamza – Action Alliance (AA)
3. Sowore Omoyele – African Action Congress (AAC)
4. Kachikwu Dumebi – African Democratic Congress (ADC)
5. Sani Yabagi Yusuf  – Action Democratic Party (ADP)
6. Tinubu Bola Ahmed – All Progressives Congress (APC)
7. Umeadi Peter Nnanna –  All Progressives Grand Alliance (APGA)
8. Ojei Princess Chichi – Allied People’s Movement (APM)
9. Nnamdi Charles Osita – Action Peoples Party (APP)
10. Adenuga Sunday Oluwafemi – Boot Party (BP)
11. Obi Peter Gregory – Labour Party (LP)
12. Musa Rabiu Kwankwaso  – New Nigeria Peoples Party (NNPP)
13. Osakwe Felix Johnson  –  National Rescue Movement (NRM)
14. Abubakar Atiku – Peoples Democratic Party (PDP)
15. Abiola Latifu Kolawole – Peoples Redemption Party (PRP)
16. Adebayo Adewole Ebenezer – Social Democratic Party (SDP)
17. Ado-Ibrahim Abdumalik  – Young Progressives Party (YPP)
18. Nwanyanwu Daniel Daberechukwu – Zenith Labour Party (ZLP)
Meanwhile, INEC National Commissioner and Chairman, Information and Voter Education Committee, Festus Okoye, has given the details of the candidates in the elections.
In a statement on Tuesday, he revealed that there were 11 persons with disability (PWDs) among those vying for various positions.
Read the full statement below:
At its regular weekly meeting held today Tuesday 20th September 2022, the Commission approved the final list of candidates for national elections (Presidential, Senatorial, and Federal Constituencies) pursuant to section 32(1) of the Electoral Act 2022 and item 8 of the Timetable and Schedule of Activities for the 2023 General Election.
The publication of the full names and addresses of all nominated candidates follows the political parties’ conduct of primaries and completion of the nomination exercise.
Nigerians may recall that at end of the process, the personal particulars of all nominated candidates were displayed in their constituencies nationwide as provided by section 29(3) of the Electoral Act.
Subsequently, validly nominated candidates had the opportunity to voluntarily withdraw their candidature by notice in writing and personally deliver such notice to the political party that nominated them for the election.
Thereafter, political parties substituted such candidates under section 31 of the Electoral Act for which the last day was 15th July 2022 for national elections and 12th August 2022 for State elections as clearly provided in item 6 of the Commission’s Timetable and Schedule of Activities.
Thereafter, no withdrawal or substitution of candidates is allowed except in the event of death as provided in section 34(1) of the Electoral Act or pursuant to an order of a Court of competent jurisdiction.
The list published today contains the names of candidates validly nominated for national elections at the close of party primaries and the period earmarked for withdrawal and substitution of candidates.
The final list of candidates for State elections (Governorship and State Constituencies) will be published on 4th October 2022 as already indicated on the Timetable and Schedule of Activities for the 2023 General Election.
We note the fact that not all the political parties conducted primaries in all the constituencies, submitted the particulars of candidates that emerged from valid primaries, or substituted their candidates after fresh primaries within 14 days as provided in section 33 of the Electoral Act.
This has led to numerous litigations, some of which are ongoing. Where the Commission was served with court orders by aggrieved aspirants or candidates before the publication of this list, these have been indicated under the remark column.
In summary, all the 18 political parties have fielded candidates and their running mates for the Presidential election. For legislative elections, 1,101 candidates are vying for 109 Senatorial seats and 3,122 candidates for Federal Constituencies i.e. House of Representatives seats, making a total of 4,223 candidates contesting for 469 legislative positions.
In terms of gender distribution, 3,875 candidates are male, made up of 35 for Presidential and Vice Presidential, 1,008 for Senate, and 2,832 for House of Representatives.  Similarly, 381 females comprising 1 for the Presidential, 92 for the Senate, and 288 for the House of Representatives are contesting. There are also 11 Persons with Disabilities (PWDs) in the race.
The list for specific constituencies is published in each State where they are located while the comprehensive nationwide list has been uploaded to the Commission’s website.
We appeal to all political parties to channel any observations on the list of candidates to the Commission and such must be signed by the National Chairman and Secretary of the political party and supported with an affidavit as provided in section 32(2) of the Electoral Act 2022.
Festus Okoye Esq
National Commissioner and Chairman, Information and Voter Education Committee
Tuesday 20th September 2022.