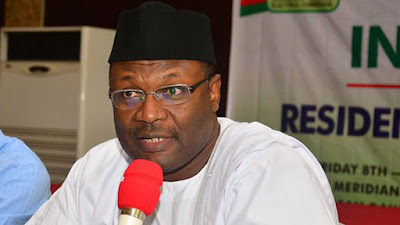 Mahmood Yakubu, INEC chairman, gave the warning on Tuesday at the training of master trainers on technologies for the 2023 general election.

Yakubu described as “worrisome” the reports of clashes and the denial of access to public facilities by parties and their supporters during the campaigns in some states.

“Let me caution parties and their supporters to focus on issues and steer clear of attacks on each other,” he said.

“These are not only violations of the Electoral Act 2022 but also negate the voluntary commitment by all political parties and candidates to the letter and spirit of the peace accord signed about three weeks ago under the auspices of the national peace committee (NPC).

“Parties, candidates and their supporters should not by acts of commission or omission further complicate the prevailing security situation in the country. A peaceful electioneering campaign is critical to the conduct of peaceful and credible elections.

“The commission will continue to monitor the situation closely and will convene a meeting with leaders of political parties next week to discuss, among other issues, the imperative of peaceful campaigns and equal access to public facilities. In the same vein, the commission will also meet with the security agencies under the auspices of the Inter-agency consultative committee on election security (ICCES) next week.”

The chairman also reiterated that the bimodal voter accreditation system (BVAS) and result viewing (IReV) have increased transparency and public confidence in the electoral process.

“They are also part of the legal requirements for conducting elections in Nigeria. The combination of the BVAS and the IReV portal have come to stay as a means of voter accreditation and transmission of election results,” he said.