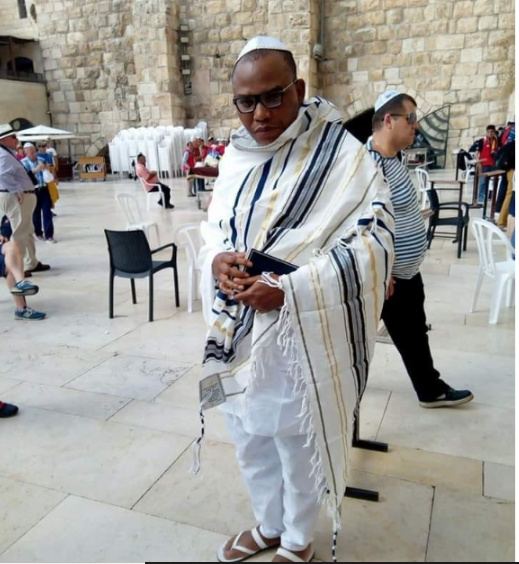 The Government of Israel has denied knowledge of the presence of Nnamdi Kanu, leader of the outlawed Indigenous People of Biafra, IPOB, in the country.
The Israeli nation said it had no evidence about the sudden appearance of Kanu in the country.
Kanu last weekend appeared in a video praying on the Wailing Wall in Jerusalem.

In the video, which surfaced online, the IPOB leader could be seen donning an Israeli outfit used for prayers while holding a book.

Just yesterday, Kanu addressed his supporters from his based and declared that there will be no election in South east come 2019.

However, the Israeli Government claimed that the pictures and videos showing Kanu praying at the Wailing Wall in Jerusalem could be old.
The Spokesperson of the Israeli Foreign Ministry, Mr Emmanuel Nashon, speaking during an interactive section with some African Journalists in Jerusalem, said there was no evidence that the leader of IPOB was in their country of recent.
“There are no details about his (Kanu) recent visit to this country yet,” Emmanuel said adding that the pictures and videos could be old ones.
Speaking on their relationship with Africa, Emmanuel said Israel has been misconstrued adding that they are getting back to their old friends.
“Our relationship with Africa is extremely important,” Emmanuel said, insisting that the continent stands to benefit more from Israel.
“Israel is a peaceful nation that believes in the process of the world at these changing times,” Emmanuel disclosed, adding that they have different religions such as: Judaism, Christianity and Islam that live peacefully with one another.

“Jerusalem is one of the great cities in the world. We have Judaism, Christianity and Islam as religions. We are considering a lot of networks with Africa and African journalists will get direct contact with Israel journalist so that you don’t need to take news from agencies.”