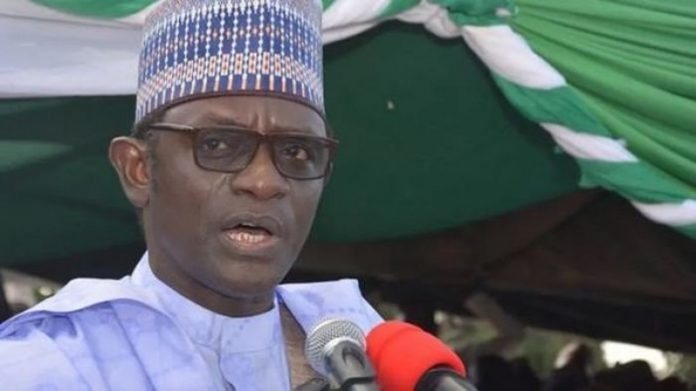 •Yobe State governor, Mai Mala Buni
A member of Yobe State House of Assembly who is suspected to have tested positive for COVID-19 has refused to be isolated at the state isolation facility.

A hospital source informed that the member was rushed to the General Sani Abacha Specialist Hospital and was admitted at the amenity ward of the hospital.

His sample according to the source was taken and later confirmed to have tested positive but he refused to go to the isolation facility which is also located at the same hospital.

“It was a running battle between us and the member of the State House of Assembly to move to the isolation center and he refused,” the source disclosed.

The source also lamented that the action of the member has put the lives of other patients and health workers in danger.

Our correspondent discovered that the entire patients of the amenity ward of the hospital have been evacuated and the wing deserted.

Only a hospital cleaner was sighted cleaning the area but medical personnel were nowhere near the amenity ward.

A senior nursing officer confirmed that the member was still inside the ward, she was however surprised that no staff was sighted around the ward.

Even the car park of the ward was empty except a white Toyota Corona Car which was said to have belonged to the member which was parked outside the premises.

The Nation also gathered that the action of the member irked the health workers at the hospital and they refused to attend to him in the last two days.

Investigation also revealed that, the State COVID-19 Committee headed by the state Deputy Governor Hon. Idi Barde Gubana had conveyed a directive to the member to move into the Isolation facility as at Tuesday.

But with his non-compliance with the orders of the committee as at the time of filling this report and the evacuation of patients at the amenity wing of the hospital couple with the anger of the health workers against the suspected member, no one can tell how he is faring at the moment.

It is also not clear whether the hospital is considering the amenity ward as an Isolation center.

The Commissioner for Health, Dr. Mohammed Lawan Gana who is also the Vice Chairman of the State

COVID-19 committee could not respond to calls and messages sent to him by our correspondent on the issue.  (The Nation)