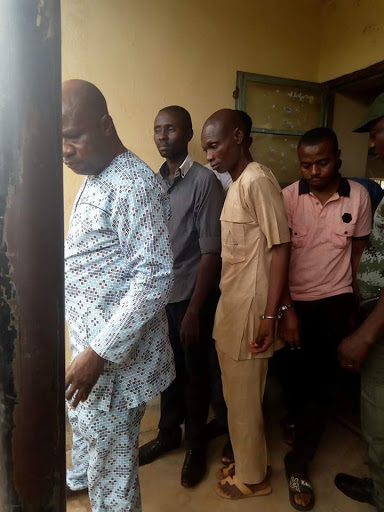 A Chief Magistrate court sitting in Makurdi today, remanded a 51 years old Lecturer with the Benue State Polytechnic Ugbokolo, Mister Andrew Ogbuja for allegedly raping a 13 years Minor Miss Ochanya Ogbaje to death in prison .Chief Magistrate Isaac Ajim who remanded the accused after decline jurisdiction to entertain the charges of criminal conspiracy and culpable homicide preferred against Mister Ogbuja, adjourned the case to October 29th 2018.Mister Andrew Ogbuja was earlier charged to court for allegedly raping the minor along with his Son, a final year student at the Federal University of Agriculture Makurdi, but was granted bail, soon after the victim was admitted to the the hospital, but died of Vascular Virgina Fistula on October 17th, 2018.As early as 8.00am, members of the National Council Of Women Society besieged the premises of the Chief Magistrate Court in Makurdi, to protest against the rape and eventual death of little Miss Ochanya Ogbanje by his Aunty’s husband.When the accused was brought to court, the angry mothers bearing placards with different inscriptions, moved to attack the accused, Mister Andrew Ogbuja, a lecturer at the Benue State Polytechnic Ugbokolo.When the case was called, the chief Magistrate declined jurisdiction and remanded the accused in prison, but what followed after, was the fruitless attempt by women to lynch him, but for the timely response of police men on duty who whisked him away.Speaking to journalist, the prosecution lawyer, agreed that the remand was in order  believing the matter will be assigned to the state  high court for proper arraignment.While the family of the late Ochanya feels betrayed by the action of their in-law, the national council of women society condemns the accused and his wife for bringing shame on womanhood as they demand for justice on behalf of the victim.As the campaign for JusticeForOchanya gains more grounds, the emotion and grief stricken mothers, haved called on government at all levels to protect the girl child from the increasing cases of all forms of abuses.

Mimi Atedze - January 20, 2022 0
The All Progressives Congress (APC) has released a timetable for its national convention. In a statement on Wednesday, John Akpanudoedehe, national secretary of the APC...