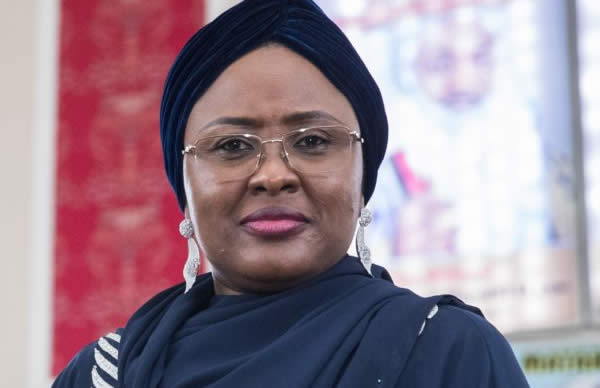 Wife of President Muhammadu Buhari said on Tuesday that she had no hand in the arrest and detention of her Aide De Camp, Sani Baban-Inna.In a statement issued on her behalf by her Director of Information,  Suleiman Haruna, the wife of the President said Baban-Inna, Chief Superintendent of Police, was arrested by the police for using his position as her ADC to dupe people.Mrs. Buhari, who is currently on a trip with her husband to the United States, said Baba-Inna had been her ADC sine 2016, but was surprised that he had defrauded unsuspecting associates and officials “as initial investigations have shown”.She denied ever sending any of her staff members “to collect any favours on her behalf or on behalf of her children and will never do so” and urged whoever had been allegedly defrauded by  Baban-Inna to get across to him to retrieve whatever he took from them.The statement read, “The attention of wife of the President, Dr. Mrs. Aisha Muhammadu Buhari has been drawn to some media publications and releases purporting illegal detention of her Aide De Camp over allegations of fraud.“The story as it pertains to her ADC, Chief Superintendent of Police (CSP) Sani Baban-Inna has it that he has been detained on the orders of Her Excellency for dropping her name and defrauding unsuspecting officials and associates. She wishes to use this opportunity to refute such allegation and to state that she has no hand in his arrest and detention.”