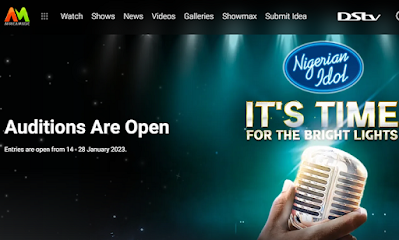 As Nigerian Idol season 8 auditions get underway, MultiChoice has invited interested contestants to submit their entries.

The performance will take place in April 2023, the South African entertainment business added in its announcement.

After a five-year hiatus, the Idol series franchise made a comeback here last year.

Following his victory over fellow participant Zadok in Season 7 of the reality series, Progress Chukwuyem was declared the champion.

The entries are accepted from January 14 through January 28, according to a blog post by Busola Tejumola, head of content and West Africa channels.

“We’re seeking for more talent that can deliver the heat like this season’s contestants she claimed.

“MultiChoice has pledged to promote youthful talent in Nigeria’s many industries. We’re still dedicated to supporting and offering up-and-coming Nigerian musicians a stage where they may flourish and fulfil their potential, just like in previous iterations of the music talent competition. The eighth season has the potential to be bigger and more exciting than previous seasons.

“Last year, after a bloody conflict between Progress and Zadok, the former won. This year, we’re seeking for additional talent who can pack a punch as our season 7 contestants did. So, before January 28, 2023, send your audition clips to the Africa Magic website if you think you have what it takes to be the next Nigerian Idol.

This year’s edition’s victor will among other goodies, walk away with the N30 million cash award.

Participants must upload a 30-second video of themselves singing any song of their choice here. Contestants must be between the ages of 16 and 18.