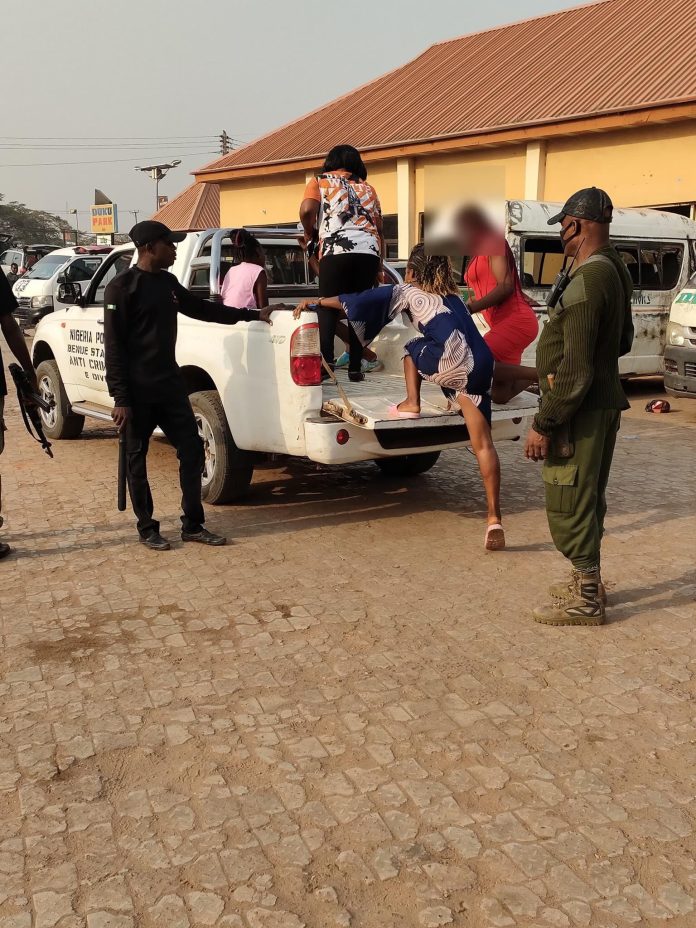 Some Nigerian ladies attempting to travel to Lagos and other countries were today bursted at a motor park and arrested by NAPTIP and Police officers.

One of the men who alerted the police and NAPTIP of this trip , KrazyTee posted this on Facebook with pictures of the alleged trafficker and the girls .

LADY ALLEGED TO BE HUMAN TRAFFICKER, ARRESTED WITH 3 UNDER AGED GIRLS AND 4 OTHERS IN MAKURDI

I went to DB park this morning so that
I can get a bus to Lagos and prepare to start my work on Monday. While I was at the park, I saw this Igbo lady in the picture buying tickets for 7 Tiv ladies to Lagos including 3 fine underaged village girls. I now got close and discovered that the whole 8 of them were using the same number as next of kin. It was glaring that she was trafficking them so I was tempted to mind my business, but looking at the three innocent small girls who might be deceived, I decided to see them as my younger sisters and get into action.
I called the smallest among the girls and tried to enquire her relationship with the Igbo girl taking them and where she is taking them to, but she didn’t know. That was when I called father Solomon Ukeyima and my brother Ukan kurugh to come and help me with investigation.
To cut the whole story short, father Mfa called police and Ukan kurugh came with NAPTIP and the girls were taken away. Now after interrogations at the police station, we discovered that this girl in this picture was out there scouting for girls to be taken to Mali, Benin republic and other countries for whatever purpose is it she is takingthem for.
There has been cases of people luring our vulnerable sisters at the IDP camps and taking them away with promises of giving them a better life and turning them into sex slaves. I am not saying this is one of such case, but I am happy that we were able to stop this one and save 3 teenage girls among others.
Let’s be more vigilant please.