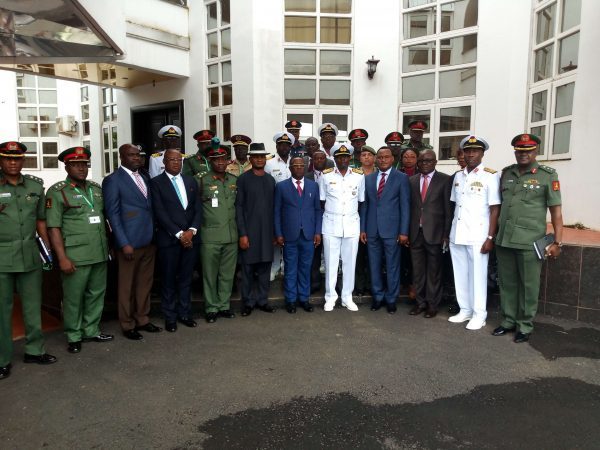 The Federal Government has been challenged to establish an implementation arm that would utilize the findings of the National Defence College course participants in solving the nation’s developmental problems.
Governor David Umahi of Ebonyi State threw the challenge on Wednesday when he received Course 27 participants of the National Defence College on a courtesy call at the Government House, Abakaliki.
The team was in the State as part of its strategic study tour as required by their curriculum at the Defence institution.
Governor Umahi, who expressed satisfaction with the aptness of the study theme, which borders on youth management and security, however emphasized that the outcome should go beyond mere research to concrete utilization of findings towards addressing youth restiveness insecurity and other vices ravaging the nation at present.
He noted that non-inclusiveness of the youths in governance, unemployment and other politically unfriendly practices were directly responsible for the myriads of youth-related chaos witnessed across the country and called on the Federal Government to seek alternative ways of meaningfully engaging the teeming Nigerian youths.
Umahi stressed that his administration has devised many strategies aimed at promoting the welfare of the youths in the State, including economic empowerment, job creation in agriculture and appointments into various political positions.
He called on the Federal Government under President Muhammadu Buhari and other political leaders to borrow a leaf from the State for the future and posterity of the country, adding that a nation without formidable youths was at the verge of collapse.
Umahi said: “I want to say that it is our pleasure to have you in our midst.
“We are also excited with the theme of the tour, which is management of the youths and national security vis-à-vis the implications.
“It is quite apt and it is coming at a time we are variously challenged in this country, be it religious, political, ethnic and joblessness.
“So, some of these tours and studies are funded and it would be very good that after we have made all these findings, that our nation, Nigeria, should be able to use your findings to solve our problems.
“I will be recommending to you to tell the authorities that they should have a kind of implementation department or outfit…
“It is important that the implementation of some of these things begin to take effect because I have discovered that we like to talk, do a lot of meetings but implementation is always a problem.
“Some other people like you have been here before and they had beautiful outing, beautiful programmes, beautiful thesis, but we cannot see it in our daily lives in its implementation.”
Related Stories
The leader of the team, Commodore Murtala Bashir, while addressing the Governor, noted that the team was in the State on a geo-strategic study tour as part of their course curriculum.
Speaking on the theme of their study: “Management of Youths and national security,” Bashir noted that the youths play critical roles in national security, constituting over 70 million of the country’s population.
He observed that they were also the most vulnerable population easily influenced either positively or negatively and added that tailoring them toward the right direction through empowerment, quality education and other edifying policies was capable of stabilizing the  national economy and by extension, national security.
Emphasizing that allowing the youths to remain liabilities was responsible for the problem of insurgencies and other crimes experienced in many quarters, Bashir commended Governor Umahi for his tangible youth-friendly policies.
He said: “You Excellency, part of the course curriculum is for participants to conduct researches on topical issues facing us as a country and that is why we are here in Ebonyi State study tour with the theme, management of Youths and national security…
“We have seen the grants and loans you have given the youths and we have seen the good number of youths you have given political appointments as Senior Technical Assistants and Technical Assistants.
“We believe that you are doing so much in that regard and before coming here, the participants have conducted a background study on what your government has been doing to mainstream the youths
“And we are glad that we are here in the State for the participants to see thing first hand and to interact with government officials, get relevant data so that they can take the issue further to identify challenges that are involved in the management of the Youths…”
The team was made up of participants from the Nigeria Army, Nigeria Air force, Nigerian Navy, the Police, National Security and Civil Defence Corps, Federal Road Safety Corps, Nigeria Prison Service, Nigeria Immigration Service as well as other strategic ministries, departments and agencies such as the Ministries of Defence, Foreign Affairs, Office of the National Security Adviser and the Department of State Services.
There were also 17 allied participants representing 17 countries, including Sierra Leone,  Ghana, Boukinafaso, Mali, Togo, Benin Republic, Niger republic, Cameroun and Gabon.
The National Defence College, Nigeria is the highest military institution established in 1992 with the core mandate of training selected senior officers of the Armed Forces and their contemporaries in para-military organizations.
Meanwhile, Governor Umahi also received the newly posted General Officer Commanding the 82 Division of the Nigeria Army, Enugu, Major General Emmanuel Kabuk, with a pledge to support and collaborate with him for effective security in the zone.
—