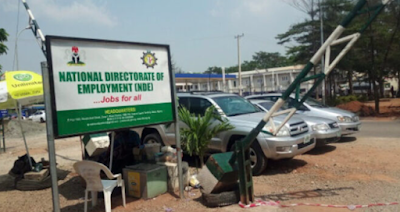 The senate committee on public account says it has commenced an investigation into the employment scheme of 774,000 Nigerians recruited for the special public works programme.

In April 2020, the federal government approved the recruitment of 774,000 Nigerians on special public works programme with the mandate of 1000 people per LGA.

The special public works programme, implemented by the National Directorate of Employment (NDE), was part of the fiscal stimulus measures adopted by the federal government in response to COVID-19 pandemic.

According to PUNCH, Mathew Urhoghide, chairman of the senate committee on public accounts, at the committee sitting on Tuesday gave the NDE two weeks to provide a full report of the SPW beneficiaries across 36 states and the federal capital territory (FCT).

All seven lawmakers present at the meeting reportedly said nobody from their constituents benefitted from the scheme.

Thompson Sekibo, senator representing Rivers East, said nobody from his district benefitted from the programme, and that all names submitted by lawmakers were not approved.

Micheal Nnachi, senator representing Ebonyi South, was also said to have asked the NDE to provide the list of beneficiaries from his district as nobody benefitted from his constituency.

The committee also reportedly agreed that the NDE provide all names, phones number, and account details of the 1,000 beneficiaries in every 774 LGAs within one week.

The federal government had targeted the sum of N52 billion for the execution of the programme as voted in the revised 2020 budget.

In June 2021, Festus Keyamo, minister of state, labour and employment, announced that the federal government had paid N24 billion to 413,630 beneficiaries of the scheme.

But the senate committee was said to have discovered that the sum of N26 billion was collected by the NDE for the project.

Abdul Isah, representative of the NDE, asked the committee to give the agency three weeks to compile the list of beneficiaries.

But members of the senate committee were said to have declined the request, giving the NDE two weeks to tender the list of all beneficiaries across the country.

Meanwhile, the project had caused a disagreement between Keyamo and the lawmakers who accused him of taking over the programme from the NDE.

On June 30, 2020, members of the national assembly asked Keyamo out of the senate after he refused a closed-door meeting with the lawmakers.

Despite the lawmakers’ decision, in July 2020, President Muhammadu Buhari ordered Keyamo to proceed with the implementation of the programme.