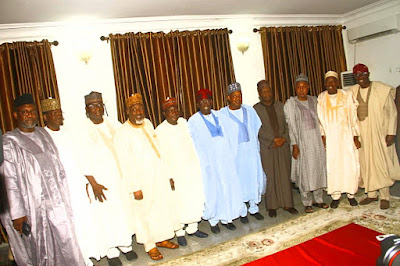 Northern governors on the platform of the All Progressives Congress, APC, on Friday met with the party’s presidential candidate, Bola Tinubu.

The meeting was aimed at congratulating Tinubu over his victory at the party’s just-concluded presidential election in Abuja.Governor Bello Masari of Katsina State made the meeting public via a series of tweets.

Masari assured that Northern governors would work hard to ensure Tinubu becomes Nigeria’s next president in 2023.

He wrote: “Myself and other @OfficialAPCNg Governors from the north paid a congratulatory visit to our flag bearer in the 2023 Presidential elections, HE @officialABAT on his well-deserved victory at the primaries. You have paid your dues as the leader of the party.

“It is now our turn to rally round you, work hard and ensure a resounding victory in the 2023 elections. At hand to receive us was the Speaker @HouseNGR @femigbaja and the former Borno State Governor @KashimSM.”