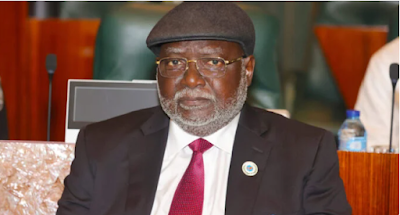 Olukayode Ariwoola, chief justice of Nigeria (CJN), says the constitution should be amended to stop some cases at the court of appeal.

Appearing before the senate on Wednesday for a screening exercise, Ariwoola told the senate that the workload on the Supreme Court is too much when compared to the number of justices on the bench.

The number of Supreme Court justices has dropped to 13 as against the maximum requirement of 21.

“More justices need to be appointed as out of 21 needed in the Supreme Court, only 13 are left and for expeditious consideration of cases, some of the cases should be allowed to stop at the court of appeal through constitution amendment to that effect,” he said.

“The national assembly should please help in this regard by carrying out required constitution amendments.”

Already, some cases that do not get to the apex court include matters from the national industrial court and court of appeal decisions from senatorial, House of Representatives or house of assembly election petitions.

In April 2021, a bill seeking to reduce the category of appeals that get to the supreme court suffered a setback in the house of representatives.

The bill, titled “Constitution of the Federal Republic of Nigeria (Fifth Alteration) Bill, 2020”, seeks to make all appeals filed at the supreme court go through leave, “that is, the court is to determine by way of application whether a particular case deserves its attention”.

Leading the debate during the plenary session, Onofiok Luke, lawmaker from Akwa Ibom and sponsor of the bill, said the supreme court is overburdened by a large number of cases.

Luke, who is the chairman of the house committee on judiciary, said the constitution grants unlimited jurisdiction to the supreme court to handle all cases, adding that this gives “litigants the unfettered right in most cases to approach the court on any issue”.

“Some litigants and lawyers have exploited this loophole and filed all manner of undeserving and unmerited cases and interlocutory applications before the court,” he said.

“It is in this vein that this constitutional alteration is proposed to limit appeals to the supreme court.”

The bill was, however, rejected by majority of the lawmakers after it was put to a voice vote by Idris Wase, deputy speaker of the house.