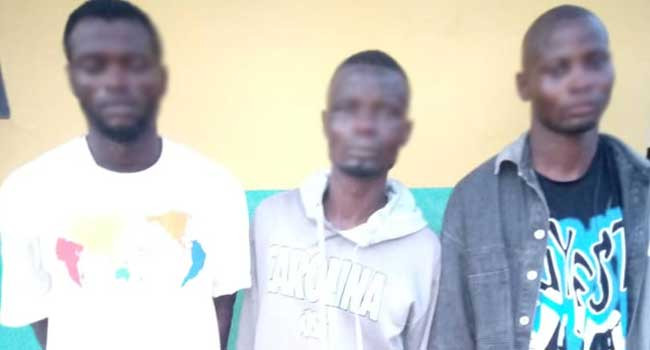 The suspects identified as Abdul Jelili, Oluwatosin Olanrewaju, and Yussuf Odesanya, were nabbed while trying to force their way into the venue of an event organized by the graduating students of Moshood Abiola Polytechnic in the state capital.

“The security personnel first arrested Abdul Jelili with a locally made pistol loaded with a live cartridge, while trying to force his way into the venue.”

Oyeyemi added that the Divisional Police Officer of Kemta division, Sunday Opebiyi, who was at the scene with his men, saw the two remaining suspects moving in a suspicious manner and ordered that they should be searched.

When the bag they were with was searched, another locally made pistol and five live cartridges were recovered.

“On interrogation, the three suspects, who are not students of any institution were unable to give a satisfactory account of their mission in the place and how they come about the guns found with them.”

Preliminary investigation revealed they are part of the hoodlums disturbing the peace of Abeokuta in recent time. They were said to be connected with a series of armed robbery and cult-related cases in the town.

The Commissioner of Police, Lanre Bankole, has directed that the suspects be transferred to State Criminal Investigation and Intelligence Department for discreet investigation.