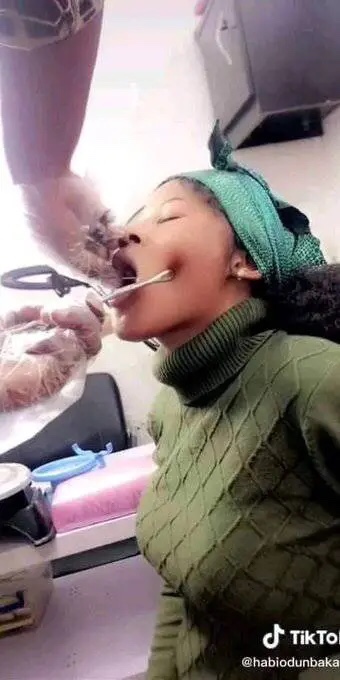 A new fashion trend, more like peer pressure, has entered Nigeria – it’s the quest for artificial dimples. This trend is confirmed more prominent in Kano state and Local Government Area in Yobe State.

A dimple is a small natural indentation in the flesh on a part of the human body, most notably in the cheek. It gives the carrier a look which many have programmed in their head as ‘sweet and sexy’.

Numerous cultures believe that cheek dimples are a good luck charm that entices people who perceive them as physically attractive, but they are also associated with heroism and innocence, which has been included in literature for many centuries.

Because of its rareness, the dimples is consider a gift. It can appear on both sides of the cheek, below the chin or below the waist. But basically there are actually two kinds of facial dimples: chin and cheek dimples.

Around 20-30% of the world’s population has dimples, which makes them quite rare. In many cultures, dimples are a sign of beauty, youth, and luck. Many men and women desire dimples on their faces. And with peer pressure picking up in different route accross the world, it would make sense why these Northern-Nigerian ladies are under pressure to compete through the pain of cheek piercing.

You can make temporary indentations by pressing hard on the skin (not recommended) or doing magic with make-up. But permanent dimples, much like fetch, just aren’t going to happen without a bit of surgical intervention or a piercing. Dimple piercings are common cheek piercings to “fake” the appearance of a dimple, with a little bulb or flat piece of metal pinching the dent in place.

Dimples remind us of the faces of babies and young children, which have evolved to be extremely attractive to human.

It’s generally agreed that dimples are genetic — but there’s an argument about the details. For a long time, dimples were considered a “dominant” genetic trait: if both your parents had them, you’d always develop some cuteness of your own.

There are also two different theories about what actually causes dimples in the first place. One is that it’s a product of shorter muscles around the mouth, but the more popular theory is that it’s a defect in the facial muscle going by the frankly brilliant name of zygomaticus major. It’s a large muscle in the side of your face, and the dimples are believed to be caused by a divide in the muscle, which is normally all in one piece. The double or bifid zygomaticus means a small dent forms whenever you smile.

Finally, in what researchers called “a rare phenomenon,” it’s possible that a person can possess a unilateral dimple: just one lone dimple on either the left or right side of his or her face. Even rarer than this sort of dimple, though, is the “fovea inferior angle oris” — aka one dimple on each side of the mouth corners.