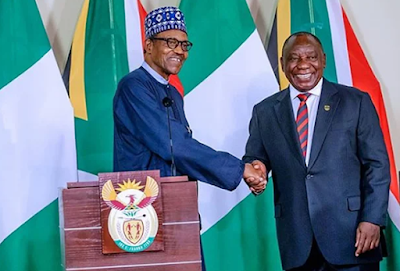 The President, Muhammadu Buhari, has described the State Visit by President Cyril Ramaphosa of South Africa as successful despite the scare generated by the new COVID-19 variant named Omicron.

Buhari received Ramaphosa at the Presidential Villa in Abuja on Wednesday after which they held a press conference.

Speaking at the conference, Buhari said new Memoranda of Understanding between Nigeria and South Africa in diverse areas were signed while existing ones were reviewed for the progress and prosperity of citizens of both countries.

Special Adviser to the President on Media and Publicity, Femi Adesina disclosed this in a statement.

He quoted Buhari as saying, ”We have now come to the end of a very successful State Visit and the 10th Session of the Nigeria-South Africa Bi-National Commission.

”Despite the scare generated by the new COVID-19 variant, we have been able to hold successful meetings, while observing strict COVID-19 protocols, through fraternal cooperation and understanding.

”I sincerely wish to thank my brother and colleague, President Cyril Ramaphosa for honouring my invitation. I equally wish to thank members of the South African delegation and the experts that worked tirelessly during the Senior Officials Meeting.

”Today, has witnessed the signing of new Memoranda of Understanding between Nigeria and South Africa in diverse areas including Youth Development, Women and Child Empowerment and Political Consultations; critical areas that will lead to increased people to people contact.

”Also, existing MOUs signed during previous Bi-National Commission meetings were also reviewed. These include MOUs on Military Cooperation, Power, Cooperation in the field of Geology, Mining, and Mineral Processing, Oil and Gas and several others.

”Today, we also jointly launched the Nigeria-South Africa Youth Dialogue, another veritable tool for interaction among our youth with the aim of creating shared values and aspirations. Many of our youth, from Nigeria and South Africa, joined us virtually during the launch.”

Buhari thanked Ramaphosa for initiating the Youth Dialogue, noting that continuous interaction between the youth of the two countries will further break down barriers and suspicion among our people.

He added that the inauguration of the Joint Ministerial Advisory Council on Industry, Trade and Investment, would enable the private sectors of the two largest economies in Africa to further promote economic cooperation and development.

”We appreciate that we need to do much more to achieve further integration of our two economies and take full advantage of the African Continental Free Trade Agreement (AfCFTA).

”Once again, I wish to thank my brother President and members of the South African delegation for their visit and their wonderful friendship, cooperation and solidarity, ” he said.

On his part, Ramaphosa thanked the leaders of Nigeria, Cote D’Ivoire, Ghana and Senegal for expressing their dissatisfaction with the travel ban imposed on South Africa and sister neighbouring countries in the aftermath of the discovery of the Omicron COVID-19 variant by South African scientists.

He described the imposition of the ban by some western countries as arbitrary, discriminatory, unscientific and unproductive in the long run.

”This is a global pandemic and overcoming it requires that we collaborate and work together as a collective.

”The resulting damage to this travel ban to the economies of the countries affected will be considerable and long-lasting.

”So I want to use this opportunity to tell the countries that have imposed this ban to reverse their decisions whether they are the northern more developed economies or in other parts of our continent or elsewhere,” he said.