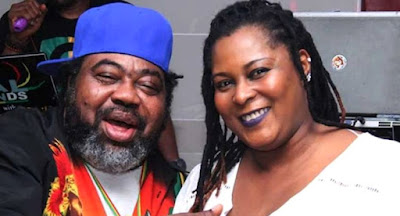 Three weeks after burying her husband, wife of late reggae icon Ras Kimono, Efe, has died.
Efe who reportedly died in early hours of Sunday was said to have attended a family function on Saturday.
She was said to be okay at the function but was later complaining of feeling unwell and was rushed to the hospital.
She gave up at about 3 am on Sunday on the way to get medical attention.
Before her death, she was actively involved in the burial ceremony of her husband and other activities involved in bidding the icon farewell.
Her death comes three months after the demise of her husband who died in June.