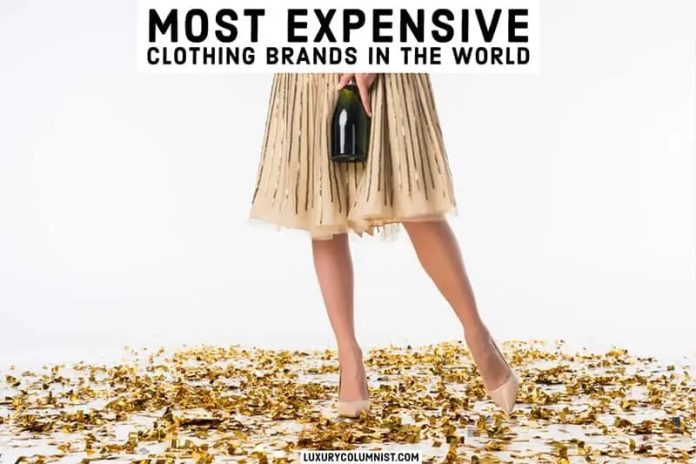 While clothes are a necessity, they can also be a luxury. The most expensive clothing brands in the world stand out from mass-produced lines thanks to handmade designs, costly fabrics and celebrity connections.

The Most Expensive Clothing Brands

The fashion industry is going through difficult times at the moment. There are many international store closures and an increasing move to online sales in recent years.

Despite these trends, there is still a market for haute couture. However, these luxury goods must distinguish themselves from the competition with technical innovations, unique design and customer loyalty schemes.

Having successfully reinvented Italian fashion house Gucci for the modern age, Tom Ford set up his own fashion and beauty label. Known for its stylish fashion accessories, beauty palettes and made-to-measure suits, the brand is an American success story.

The Italian shoemaker Salvatore Ferragamo set up shop in Hollywood in 1923 and gained a large following. His handmade shoes were worn by Audrey Hepburn, Marilyn Monroe, Greta Garbo and Judy Garland.

These days, the luxury Italian brand also makes clothing, accessories and fragrances for men and women. New CEO Marco Gobbetti had reenergized Burberry and will no doubt have a big impact.

Popular with Hollywood stars like Anne Hathaway, Oscar de la Renta was a fashion designer from the Dominican Republic. Born in 1932, he dressed Jacqueline Kennedy for many of her key events.

Stars loved Oscar’s vibrant use of pattern and elegant silhouettes.

The American fashion designer of the same name launched his label in 1984. With headquarters in New York, the casual luxury brand has global reach and a successful e-commerce site.

The most nominated director for awards in the history of the Council of Fashion Designers of America (CFDA), Marc Jacobs is known for its popular Daisy fragrance and relaxed styling.

This British brand is famous for its stylish trench coats and tartan check pattern. Founded by Thomas Burberry in1856, the label holds a Royal Warrant by Prince Charles as an Outfitter and a Royal Warrant by Queen Elizabeth as a Weatherproofer.

Although the company is of British origin, they have a presence in many countries around the world and are particularly popular in Asia.

The brainchild of Domenico Dolce and Stefano Gabbana, this Italian brand was established in 1985. Since then, they’ve branched out from women’s clothing to jewelry, perfumes, handbags, footwear, watches and sunglasses.

In some articles online you may read about the world’s most expensive sunglasses which are reportedly by Dolce & Gabbana and cost $383,609. That is a typing error and the actual cost of the discontinued DG2027B model was $383, so don’t believe everything that you read online!

This famous Italian brand was founded by Guccio Gucci in 1920. The first store opened in 1921 in Florence.

Established in 1967 by American designer Ralph Lauren, the fashion label has several luxury lines. Ralph Lauren Purple Label is the brand’s most expensive men’s range, while the Collection line is the most exclusive of their women’s ranges.

Founded by Giorgio Armani in 1975, the Italian fashion house has since expanded to include Emporio Armani, Armani Collezioni, Armani Jeans, Armani Exchange and Armani Prive.

Although many of the Armani lines are aimed at the middle market, labels such as Armani Prive sit firmly within the luxury segment.

This famous French fashion house is known for its beauty products as well as its chic tuxedo suits and androgynous style. The iconic brand was created by Yves Saint Laurent and his partner Pierre Bergé in 1961.

Yves Saint Laurent also popularized the safari look as well as camouflage and the trapeze dress.

The Italian fashion house was established by Mario Prada in Milan in 1913. Now run by his youngest granddaughter, Miuccia Prada, the brand is known for its quirky aesthetic.

Referenced in the movie, The Devil Wears Prada, this forward-thinking company is particularly known for its leather handbags.

The French brand created by Gabrielle “Coco” Chanel in 1909 is famous for its boucle wool suits, elegant perfumes and quilted leather handbags. Her designs have a timeless quality that is still in fashion today.

The Chanel little black dress is a staple in many affluent women’s wardrobes. Perhaps Chanel’s most expensive item is the Diamond Forever classic bag, which costs well over £200,000.

One of the most expensive brands in the world, Versace was set up in 1978. The brainchild of Gianni Versace, this Italian designer brand created clothing from innovative fabrics such as metal mesh.

Gianni Versace has been worn by Elizabeth Taylor, Jennifer Lopez and Princess Diana. After the tragic murder of the founder, Gianni’s sister Donatella Versace became the Creative Director of the brand.

One of the most famous French luxury brands, Christian Dior has been going strong since 1946. Often worn by Jacqueline Kennedy, the fashion house is popular with celebrities such as Charlize Theron and Natalie Portman.

Initially known for their luxury luggage trunks and other leather goods, this famous French brand was established by Louis Vuitton in 1854. The company is now owned by Bernard Arnault, the richest person in the world.

Having branched out to clothing, accessories and jewelry, Louis Vuittonis popular with celebrities such as Angelina Jolie and Sarah Jessica Parker. Creative Director Nicolas Ghesquière has managed to revitalize the historic brand without compromising on elegance.