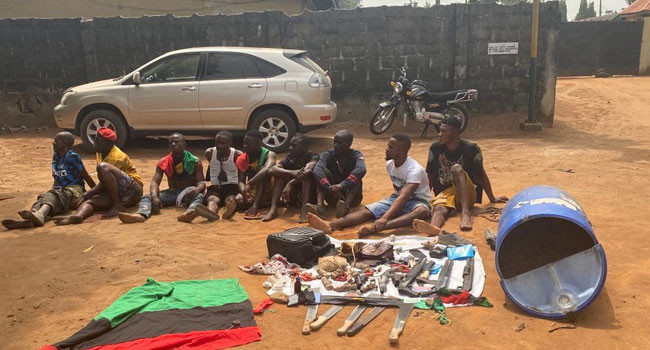 Three members of the Indigenous People of Biafra (IPOB) have been killed after engaging men of the Nigerian Police Force (NPF) in a gun battle.

A spokesman for the Imo State Police Command, CSP Micheal Abattam said the command’s tactical teams carried out a raid on Monday, February 7, after credible intelligence gathering and surveillance of some identified camps of the terror group located at Okwudo in Njaba LGA of Imo State and Umuorji Mgbidi in Oru West LGA of Imo State respectively.

Members of the proscribed group were dislodged after a fierce gun battle. They reportedly suffered heavy casualties and in the process, lost three of their members while nine others were arrested with various degrees of bullet wounds.

CSP Abattam noted that while the investigation is ongoing, the three corpses have been deposited at Federal Medical Center Mortuary Owerri.

The police spokesperson said investigations have uncovered that the suspects are the ones terrorizing the people of Imo State.

He further stated that the suspects orchestrated several reported cases of kidnapping and armed robbery, adding that they have made useful statements and have volunteered to assist the police in the arresting of his members of their gang presently, on the run.