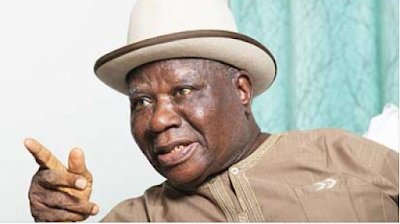 While paying homage to President Muhammadu Buhari, who is in the st Clark reacted to Sunday’s announcement of Shettima by Tinubu in Daura, Katsina State,

Condemning the selection in a statement on Monday, Clark, the Convener of Pan Niger Delta Forum (PANDEF), said the action of the former Lagos State Governor in appointing a Muslim to run with him in a multi-ethnic and multi-religious country has made him to feel very threatened.

I feel threatened for our beloved country because of the way things are going. Nigeria is a multi-ethnic and multi-religious nation, with Christianity and Islam as the major religions, even though Nigeria is a secular state.

In compliance with Constitutional provisions of inclusiveness, the number one and number two positions in the country, viz, President and Vice President, have always been occupied by practitioners of the two major religions, to ensure balancing.

It will be recalled that the Presidential candidate of the All Progressives’ Congress (APC), Alhaji Ahmed Bola Tinubu, could not be chosen in 2015 as Vice President to Muhammadu Buhari, because he is a Muslim and Muhammadu Buhari is a Muslim. Alhaji Ahmed Bola Tinubu, in his own words confirmed this in his statement in Abeokuta, Ogun State. What has changed? One quality of a good leader is consistency. A good leader must act in the same way at all times, to all people. He must not display double standards.

Today, what has the Presidential candidate of the APC, Alhaji Bola Ahmed Tinubu done? He has picked a person of his religion, a Muslim, as his Running-mate. Such a choice is not inclusive, it is not good for a secular state like Nigeria.

According to Clark, Tinubu should know that patriotism is a quality of a good leader.

On the reasons adduced by Alhaji Tinubu on why he chose Kashim Shettima as Running-mate, is the APC Presidential Flag bearer telling Nigerians that there are no Christians in the APC from the north, who are “competent, capable and reliable?

There are rumours of an attempt to Islamise the country. Are all these pointers to the confirmation and actualisation of such rumours.

One needs to bear in mind the antecedents of the major backers of Alhaji Ahmed Tinubu’s ambition, which include Nasir Ahmad el-Rufai, the Governor of Kaduna State, Abdullahi Umar Ganduje, the Governor of Kano State and the chosen one – Kashim Shettima.

Both the Governor and Deputy Governor in Kaduna State, are Muslims. A blatant action by the Governor, Nasir el-Rufai. Unfortunately, the APC Gubernatorial candidate for the 2023 election, is following suit. Is there a deliberate move of making Kaduna an Islamic State?

Unconfirmed statistics put the ratio of Christians and Muslims in Kaduna State as 50/50; some statistics even put it as 55% for Christians and 45% for Muslims, yet Nasir el-Rufai, despite complaints and agitations by people not only from Kaduna State, but from the entire country, ‘decided’ to pick a Muslim as his Deputy.

It is an illusion to think that except one is from the north, you may not win the election. So, the idea that unless you come from the north or you are a Muslim, or a Muslim supports you if you are not a Muslim, you cannot win an election, should immediately be jettisoned by proponents of such an idea. The north needs the south to be in power, same way the south needs the north to be in power. No part can do it alone. About 46% or more of Nigerians are Christians.

Yet a group of persons want to sideline and exclude them from the affairs of the country. This is not possible.

The question is, is Alhaji Bola Ahmad Tinubu under pressure from these his core supporters and backers, to pick a Muslim as his Running-mate, and did he cave in to the pressure because “it is his turn to be President of Nigeria”, despite complaints and protestations?

The PDP is the cause of these things because of its refusal to zone its presidency to the south.

These are dangerous signals. Alhaji Ahmed Tinubu cannot compare 2022/2023 with 1993. In 1993, majority of Nigerians, on their own volition, supported the Muslim/Muslim ticket of M. K. O. Abiola and Babagana Kingibe of the Social Democratic Party (SDP), as President and Vice President, 29 years ago. It was not shoved on them; it was not forced on them.

Also, during that period, Nigeria was not so divided on ethnic and religious divides. If people are complaining, a good leader should listen. Unfortunately, we have leaders who not only ignore the concerns of the people with impunity, but also make crass statements.

The insecurity, the fate of Nigeria as a failing state as it is today, did not exist in 1993. The killing of Christians, especially Catholic Priests, the forty (40) persons killed at the Catholic Church in Owo, Ondo State; what happened at the Kuje Medium Correctional Centre a few days ago, where about 1,000 inmates, including about 63 Boko Haram terrorists were freed, the attack on the Kaduna bound train, and the killing of some and abduction of several of the passengers, does not speak well of the times we are in. They are all signs of a failing state and ought to make everyone to be very cautious in our actions. And nobody should aggravate the situation.

Those who are leaders should remember that power is transient.