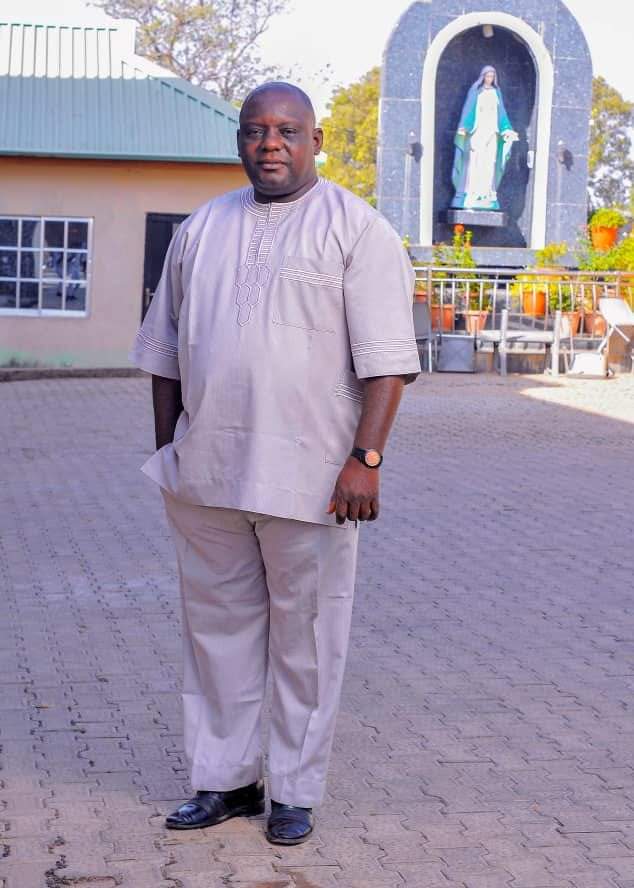 The Managing Director of Olusegun Obasanjo Presidential Library Otta, Mr. Vitalis Ortese on Friday joined  friends and well wishers in celebrating with his friend ,Rev Father Vitus Borogo on his 50th Birthday. Congratulating the priest in his tribute titled Reflections on a Bond of Brotherhood and Friendship, Mr Ortese noted that  he  should never have been friends with Fr. Borogo, much less a brother describing their relationship which dates back to many years ago when he was about nine or ten years old as brotherly.

Reflections on a Bond of Brotherhood and Friendship

I should never have been friends with Fr. Borogo, much less a brother. Many years ago, I was probably nine or ten years, and I think he was the same. Well, if he says he is 50 today, it means he was that age too. My mother sent me to their house in Area 3 in Ahmadu Bello University, one of the several official staff quarters, Samaru Zaria, to find out if Mama Juliana Borogo, Fr. Borogo’s mother was around. There were no mobile phones then. Their home was about five minutes walking distance away from ours in the same quarters.

I went to the house and met Fr. Borogo.  He wasn’t much of a looker, he looked mischievous and he didn’t disappoint. I directed my enquiry to him that my mother would want to know if his mother was at home.

Fr. Borogo, with clear mischief in his face (and I should have known that he was up to something, but I was naïve) asked me “you want to see my mother?” He smiled smirkishly, went into a room, and brought out this hairy and menacing dog that had the strands of its hairs standing apart. The name of the dog was Fiji. The dog viciously lunged after me. I have never raced that fast in my entire life. With the speed with which I ran, I would have certainly completed 100 meters in 10 seconds or less.

Is this the kind person, one should end up with as a friend for 40 years?

This is 40 years after and I can still vividly remember the panting for my life literally. Effectively, this should have ended whatever cordial relationship we might have had because to me this was a declaration of a “war” – a battle line was drawn and the first shot fired.

But here we are today. We became Mass Servers in the same church – St.   Mary’s Catholic Church, Samaru and we were bonded in the sacrifice of the Holy Mass. We went to the same primary school. I would later become the assistant head boy of the afternoon session, and I think Fr. became the timekeeper.

We did a lot of things together. Apart from being Mass Servers and schoolmates, we also joined the Boys Scout, 12th Zaria Troop that was led by Augustine Ugwoke as the Scout Master. As boys, we were inspired by our parish priest at that time, then Reverend Fr John Horan, an Irish missionary to become priests.

Fr Borogo and I were so curious to begin our priestly training so much so that as primary school pupils, we went to the St Joseph Junior Seminary along Basawa Road in Zaria. It was then Fr Matthew Hassan Kukah that was the Rector. Of course, we had not finished primary school, Fr Kukah now the Bishop of Sokoto Diocese simply advised and encouraged us and asked us to go and complete our primary education and come back.

I can’t remember exactly what happened but we couldn’t meet up with St. Joseph Junior Seminary admission requirements. Consequently, we had to undertake the adventures of our life. For the first time for me and Fr Borogo, we travelled to Makurdi the capital of Benue State by train in the late August of 1984. Our fathers, both late now showed love and care as they accompanied us on this “first missionary journey.” We arrived in Makurdi after two days after we departed from Zaria.

Indeed, it was an exciting journey. A journey that was meant to kick starts our aspirations. It was a journey of hope. A day after we arrived, our fathers took aspiring their Reverend Fathers to the St. James Minor Seminary, Makurdi which was then located in the outskirt of Makurdi in a place called Kanshio. The minor seminary would later move to Aliade but now in Yandev, near Gboko, then had Fr Athanasius Atule Usuh who later became the first indigenous bishop of the catholic diocese of Makurdi.

On our arrival at the school, we first met with Fr Pius Ajiki who was just about two months a priest (Fr Ajiki, now an associate professor, lectures in the Department of Religion and Cultural Studies, Benue State University, Makurdi was ordained a priest June 30, 1984) and was posted to the minor seminary as a formator.

However, the person we were to meet was the Rector, then Reverend Father Athanasius Atule Usuh whom as his students, we nicknamed “Atule Buggy” on account of his life as a music maestro. I remember, we sat in his living room as our fathers spoke to him about our mission to Makurdi. Fr. Usuh administered an on the spot interview by passing to us two sheets of plain paper. His instruction was quite simple and explicit; write any story of your choice. While we sweated and wrote, our fathers were served a bottle each of chilled lager beer of “Double Crown” brand. Usually, when men drink, they talk. The topic for discussion as I recalled at the time, was very topical ‘War Against Indiscipline” that the then military administration of General Muhammadu Buhari/Idiagbon was implementing at the time.

I wrote on the story of Anansi and the Tortoise, the folklore story that was popular at the time. I don’t know what Fr Borogo wrote. To make a long story short, we were both given admission into Form One.

Words cannot describe the joy we had when we were offered admission. My father took me to Ikpa-yongo as the resumption date was less than a week from the time of our admission. However, Borogo went back to Zaria with his father to make adequate preparations for resumption. On September 4, 1984, I resumed at the minor seminary. The first person I met, now Fr Peter Genger came in from Lafia, another town about one 30 minutes away from Makurdi. We were thirty-three in all in form one.

Fr Borogo is a small boy, he may not remember all these details but, thus commenced the journey of Borogo into the holy and kingly Roman Catholic priesthood 38 years ago. I have remembered and shared this long story – though highly summarised – to express how Fr Borogo and I have come a long way.

“Borogs” as we called him in the minor seminary and “Gish” as we called him at home is a passionate man. He’s passionate about what he knows or believes in. He is a friend. He is a brother. I did not complete my training become a priest but through me, he has two lovely daughters; Seember and Dooter. And somehow rather uniquely, my beautiful wife, Ngunan is from his village in Ushongo – you may wish to call it a coincidence or whatever.

I do not know how else to describe our relationship. I don’t know how to think of life without “Padre Borogo” and I wonder how he will think of life without me! Ours families are deeply interwoven. When I lost my dad in 1992, as a student in Zaria, I basically moved into the Borogos home. I was not treated any differently and our jokes were out of these world, can I ever forget Iyorpuu, the first born of the house whom God has called to his side? Gosh…(Gwaza), Igba, Baby, Ade and last born CY. If you know the Borogos and you don’t know Fiji or Billie, your knowing them is not complete, forget whether you are in-law. You don’t know them. These are things that make Fr. Borogo, who he is and what he has become.

I wish to congratulate Fr Borogo on this propitious moment of turning 50. The good thing about turning 50 is that you again become a youth. Victor Hugo tells us that “forty is the old age of youth. Fifty is the youth of old age.” Today, you have become a youth by joining club 50. You are on the fifteenth floor now.

I pray God to listen to the silent prayers of your heart and I also pray that He be gracious and keep you healthier, stronger, happier and focused as you turn to a new age.