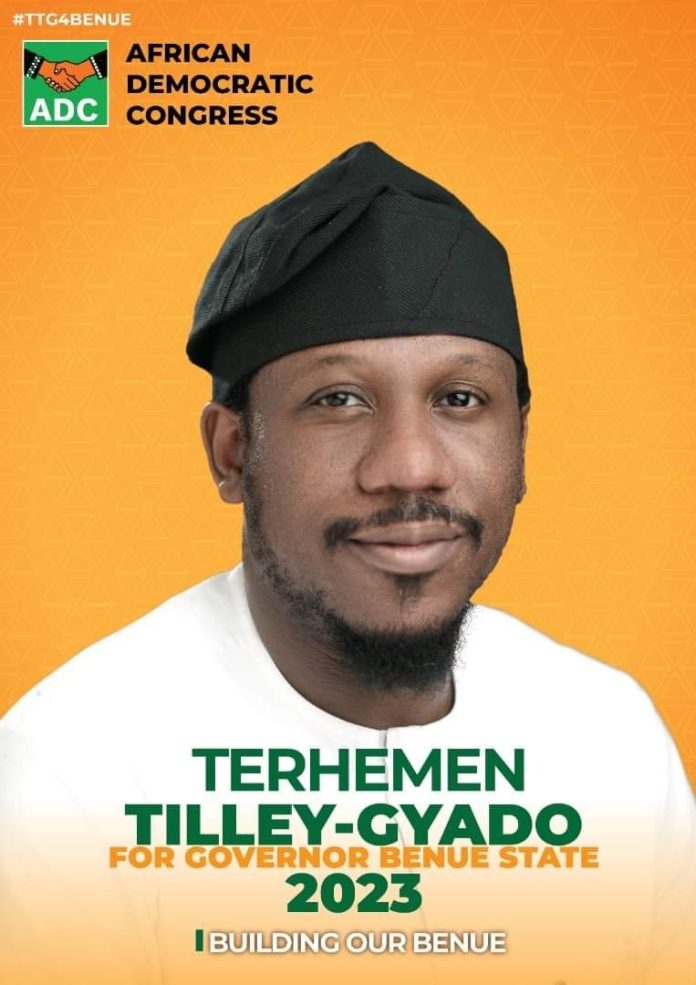 The Gubernatorial Candidate of the African Democratic Congress ADC, Engineer Terhemen Tilley Gyado has addressed the issues surrounding his defection from the All Progressives Congress, APC to the African Democratic Congress, ADC.
Recall that, the Gubernatorial primary of the APC where Engr. Gyado belonged was marred by impasse amounting to many litigations.

In a heartfelt lengthy and explicit post on his social media platforms, the UK trained and vastly experienced young Engineer, addressed many issues and his views are fully captured below:

“Last week, I received a mischievous message that had gone viral on WhatsApp, regarding my political aspiration to become Executive Governor of Benue State in 2023. The message alleged that my father, Sen. Jack Tilley-Gyado, a stakeholder in the All Progressives Congress (APC), had planted me in the African Democratic Congress (ADC) as a decoy for the downfall of his own party, the APC. This is an absurd and absolute fallacy.

It is very unfortunate that there are so many regressive elements littering Benue State’s political landscape, and while we should be objectively and collectively charting our way out of the security and economic quagmire we are in, so much focus and energy are still being given to propaganda, fake news and insults.

From my experience in the 2019 political process in which I contested for the Jechira House of Representatives seat, I was unpleasantly surprised to find competence sacrificed at the altar of imposition and personal interests. On the morning of the primaries, after over a year of campaigning, several aspirants were suddenly stepped down by the party under the guise of a zoning arrangement that had not been communicated or agreed hitherto. Needless to say that the party went on to lose that seat in the general elections.

My experience in the current electoral cycle has not been much different, and again the adverse results are evident in the rancour that has ensued from primary elections in the mainstream political parties, at all levels.

In previous eras, we were deceived into thinking that Nigeria can only be a two-party state, and as a result majority of people blindly coalesced around two predominant prevailing platforms at a time. However, the polity has evolved and the choice of alternative platforms is broadening.

My participation in politics is born out of a deep yearning to see change in the fruit of our politics as a people. Whereas Benue and Nigeria have reaped insecurity, lack of quality healthcare, poor education, poverty, and hunger from the fields of a questionable brand of politics, in other climes, even nearby Ghana, politics is yielding bountiful dividends to the people.

It is this yearning, and not partisan politics as a power trip, a business venture or a hobby, that has led me to a mental emancipation from the false sense of security of politicking in the current mainstream political parties. Accordingly, I joined the ADC, where I found a platform of like minds. One of such minds was the ADC’s Presidential Candidate in 2019, Dr. Obadiah Mailafia, now of blessed memory, who was a personal friend and mentor to my wife and I. In ADC, I have found intelligent and committed candidates who are passionate about changing the narrative. If you follow the history of the party, you will see that it has continued to have organic and consistent growth, and it seeks to emerge a new generation of transformational political leaders across the country. Ahead of the 2023 General Elections, we have put great effort into grooming this platform and ensuring that it presents itself as a credible alternative for the people of Benue.

My affiliation to my father, on the other hand, is by blood. He birthed and nurtured me, and for that I am eternally grateful. Nevertheless, he has his own mind and political views, and I have mine. As humans, blood ties do not necessarily equate to political ties and this is evident throughout history. Being of a different generation of Nigerian politicians, I can and have made my choice.

As young Nigerians, it is time for us to seek the opportunity to contribute our quota to nation-building so that we are not driven further into the abyss of suffering due to bad governance. Those who are more concerned with mischief and mere politics of propaganda may choose to continue with their antics, but I have chosen to seize the day of the 2023 elections and put my best forward to present myself as a credible and viable option for good governance in Benue State. I welcome all, blood or not, to join in this noble task of building the Benue of our dreams.

With just a few months to the commencement of campaigns towards the 2023 elections, Engr. TTG like he is fondly called by friends and supporters is definitely in the ring for the crown.
Interesting times are ahead and we will surely bring you all the gist.